200 Artists’ Books on the Move

The books will rotate between a fixed display in the library and out to handle in room OC4. 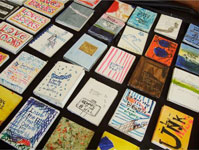 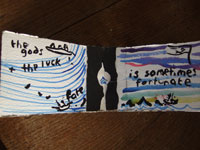 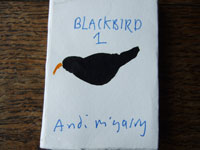 I regard myself as having a rather a Spartan approach. Book by book – my responses are distilled, not thickly applied, instead – essences are used. Rawness – directness implied – and applied.

I harness spontaneity – infusing personal experiences from journals, notebooks, sketchbooks, scribblings, rantings, ravings, ramblings. Leaping across chasms from camcorders to computer, from songsmithing to painting. The things described are things that excite me, things I find inspiring; these are things I’ve recognised as I sped through life.

Applying myself through the tools of my trade, word mongering, using turns of phrase, anything to try to enlist the viewer, maybe someone who I can share a laugh with. Inhabitants of my pages “waifish figures…” stretching across Arcadian landscapes. Working a sequence of events a visual narrative. I am in the business of producing works of brevity; Haiku like, rough hewn, breathless, and spare. Have I specialised in a kind of "Speedy book" to quote Radoslaw Nowakowski? 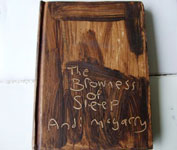 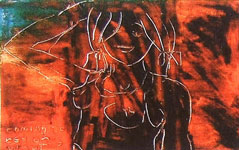 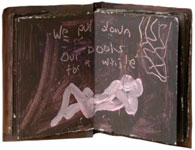 But – it does appear to me to be more than a rush – more than just a quickness of execution – I am looking for honesty and un-complication. Exploring how to simplify works that are accessible not only to myself but have some universal quality. Strike whilst the iron is hot, then distill and pare away to see what remains.

Is it the case at the end of it all, that the book is a container of ideas? Well, yes they are, but they are more than that. A lot of emphasis can be placed on the actual container – the thing that contains the ideas – I like the container too – but I also like the ideas. Getting the right combination of content and Ideas to fill the right container is the crucial task.

In my artist’s book Campsite for example I begin with a "haiku-esque" stride:

“…It was raining as the campsite began to fill with tents…", the book finishes 14 short pages later, so it’s quite brief! Then the size of the book is inviting – palm sized, intimate, with a narrative thread running through the centre, flanked on either side by colourful, bright semi-abstract images. There is something symbiotic about words and images and the urge of trying to marshal the perfect combination.

Each of these works has in fact been taken from a master copy- so they are copies of a copy, and this is the case whether it’s an edition of 1 or 50. I make unique editions. As a methodology it’s quite an interesting approach, there are improvements made as I go from one copy to the next; spelling mistakes can be rectified (or even incorporated) into the ‘production line’.

The fact that I don’t involve technology for the main part in my bookish activity is my choice. A choice that that relies instead on a brush, a pen, ink and paint. Less reliance on technology means greater emphasis is placed on the fact that the book is a bespoke item- almost unfortunately hand crafted. 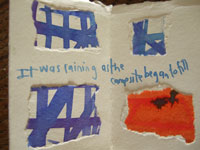 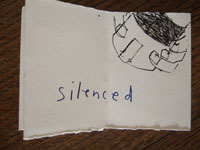 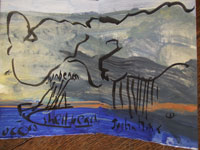 A lot of the emphasis in my books has been on drawing. Drawing is as natural as breathing or picking up a camera or a guitar. Drawing is an extension of my visualisation process. I harbour many notebooks at home, sketchbooks and journals and they are crammed with scribblings, ideas and musings.

Trawling back over these books there are many roads to follow…

The Browness of Sleep began as an idea about sleep. Expanding, and being inspired by Edgar Allen Poe’s quote where he described sleep as "Little Slices of Death". I explored the moment leading up and falling into the grand celestial barge of sleep. I made a series of acrylic paintings on board, scratching words into the painting – "I feel like sleep is near". The sequence of paintings lent themselves to book form and thus followed The Browness of Sleep, an artist’s book. I didn’t feel they were little slices of death… too lively by half. I decided to animate the book and create a film, and once the film was completed I needed a soundtrack to accompany the film. I then wrote and recorded a song using the words from the book and painting – which made the project complete. http://youtu.be/5JzRa4xSZzQ

And with filmmaking comes many new possibilities… To have moving images at your disposal creates new a visual dialogue for the landscape and figure. In the film Hippy Jackdaw, 2012 (http://youtu.be/ddgcnmCxxbg ) I build and test a boat with a group of young people on a local beach, the video film is accompanied by a soundtrack, that is written by myself; and Falling down broken house blues is about a D.I.Y. man and the fight with his arch nemesis: http://youtu.be/7w94aT9ODiE 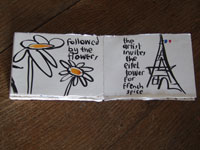 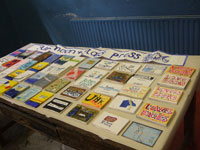 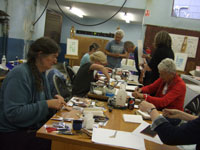 Words and Image – Moving images and music – have very similar properties. I like the fact there is a great deal of playfulness in my work and it comes through in my books – what I’m projecting – is a sense of fun, there are dogs and children and laughter never far from my imaginative horizon. Not to forget all the kissing and swimming and sexy girls and hill climbing, sleeping and dreaming and waking and beer drinking. Last week I was writing in my notebook when I heard from the corner of my ear the sound of my 17 year old daughter Pippa singing in the bathroom- washing her hair or whatever – I stopped what I was doing and listened – she was lashing it out – I laughed – she was bouncing off the tiles! – I saw that this moment needed capturing at once and made up a book straight away – titled ‘singing in the bathroom’. It was almost like bottling up a draft of life itself. Now don’t ask me… why I would bottle this stuff – that’s a question to ask on another day – but feel free to imbibe – the selection on offer – you have 200 bottles here to choose from!

You can also see many more images of Andi’s books at:
200 Artists’ Books on the Move