The conference event began on Thursday 16th July with a keynote lecture by Brad Freeman – founder and editor of the Journal of Artists’ Books, JAB, Chicago. An informative talk on his own practice with artists’ books and a behind the scenes tour of the production of an issue of JAB which produced much printer envy in the audience as we watched JAB being printed on the centre’s Heidelberg offset press at Columbia College Chicago. http://bradfreemanbooks.com 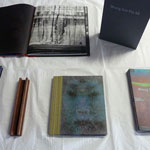 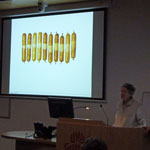 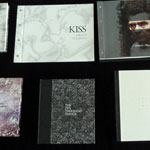 Freeman’s talk was followed by a trio of papers; Considering the Artist’s Book.
Marian Macken (Associate Professor, Department of Architecture, XJTLU, China) showed examples of books including Jane Hyslop’s Wild Plants Collected in Midlothian (2002), and talked about how the format of the artist’s book is used as a tool for design, concept and dissemination of projects by students of architecture, as a means of relating space and also as a finished project piece. http://academic.xjtlu.edu.cn/arch/Staff/marian-macken

Noreen Grahame of Grahame Galleries + Editions, spoke about the history of artists’ books and seminal works she has encountered over the years as a gallerist, which included Dieter Roth’s Literaturwurst and Ian Burn’s Xerox Book (1968) amongst others. www.grahamegalleries.com.au

Joel Lardner (Senior Lecturer – Illustration at Arts University Bournemouth, UK) gave a presentation via video, which was an inspiring look at the use of the picture book as a site of contemporary practice for artists/illustrators. Although he was unable to be there in person, the video kept us captivated for his talk, featuring plenty of well-contextualised visual examples from Heinz Edelmann’s The Yellow Submarine (1968) to contemporary publications from Nobrow and Flying Eye Books. aub.ac.uk/staff/jlardner

Lyn Ashby’s afternoon keynote continued the discussions, with a presentation on non-linear reading, ranging from the Gutenberg Bible to his own practice with artists’ books. These were also on display at the artist’s book fair, where I had time to admire and experience physical works such as Twenty Minutes and Ideo(t) Grammatica. www.lynashby.com

Marian Crawford of Monash University, Melbourne gave a fascinating talk ‘The News and the Book’ that counteracted the speed of how we consume news on a daily basis with the slower pace of letterpress printing artists’ books that try to somehow come to terms with the atrocities that we ingest. Alongside this, Crawford cited examples of works commenting on knowledge and truth held within physical books, including Korean artist Woojun Chun’s installation ‘Library’ at the 53rd Venice Biennale and Cuban artist Wilfredo Prieto’s ‘Biblioteca Blanca (2004) which is now on permanent display in The Museum of Old and New Art (MONA), in Tasmania. www.mariancrawford.com

Caren Florance (Australia National University’s School of Art, Canberra) spoke eloquently on her research and collaborations with poetry, poetics and artists’ books. Florance’s practice (as Ampersand Duck) is well-known internationally, and it was a treat to hear her talk about projects that had emanated closer to home in Australia. These included her typographical interventions at the Museum of Australian Democracy, and a recent collaboration with poet and artist Angela Gardner of Light-Trap Press (http://light-trap.blogspot.com) for the work ‘Interference’ (2014) which was also included in the exhibition Books by Artists on show at QCA’s Webb Gallery. http://ampersandduck.com

Daniel Della-Bosca (Queensland College of Arts) offered us an intense glimpse into the world of fractal mathematics as part of his research into the field of aesthetics, and also talked about his own practice with 3D printing for the production of unique bookworks which were also on show at the artist’s book fair.

Papers on Materiality covered an energetic and engaging presentation by Gabriella Wilson (PhD student at QCA) on the collaborative broadsheet ‘The Equal Standard Broadzine’ that is distributed locally and online. https://theequalstandard.wordpress.com

Angela Gardner presented on text and typography in Australian Artists’ Books, including the wonderful ‘Dorothy Lamour’s life as a phrase book’ by Noëlle Janaczewska, published by Wayzgoose Press (2006). You can read an interview by Lawrence Finn with Mike Hudson & Jadwiga Jarvis on their work with Wayzgoose Press at: http://www.anzprintmaker.com/index.php/Private-Presses/an-interview-with-the-wayzgoose-press.html

The day’s talks ended with local artist/photographer Doug Spowart performing a reading of a book which included the audience being given the book itself to read as he talked. The book fair was swiftly set up and we then moved on to view the handling exhibition Books by Artists at the Webb Gallery downstairs at QCA – which included many great books by local, regional and national artists from Australasia. Treats included handling many of the books that we had heard about in the day’s talks, as well as some beautiful bindings with Kangaroo and fish skin by Cassandra Lehman Schultz, and the poignant ‘Mr Parry writes to his wife and daughter’ by Rose Rigley. 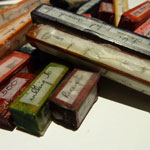 After my own presentation on artists’ books as a physical site of practice, Friday morning considered The Haptic, beginning with a talk by artist and the ABBE organiser Tim Mosely of QCA. Mosely’s paper considered the binary relationship of optic striated space and haptic smooth space and discussed examples including Xu Bing’s ‘Book from the Sky’ and Ed Ruscha’s ’26 Gasoline Stations’. Candace Hicks’s ‘String Theory’ was shown as an example of the haptic mode of production and our relationship with material form, relating centuries of bookbinding practice with how physical fabric forms part of our lived experience. Deleuze and Guattari’s principles of directed smooth space were applied to and explained by the artist’s book LKME by Noel McKenna.

Deirdre Brollo (University of Newcastle Australia) followed with a talk on the representation of photography, hands and the artist’s book, with some great examples including Sarah McConnell’s ‘Attempts at Making Work’ (2011), Buzz Spector’s ‘Between the Sheets’ (The Ink Shop/ Olive Branch Press, 2003) and her own artist’s book ‘Fathom’ (2013) on the precarious nature of sea voyages. Fathom, as she pointed out in her talk is also a measurement related to the hand, historically the total arm span of a human.

Bridget Hillebrand (Monash University) talked about her artists’ books practice from a very original point of view – that of her experiences as a rock climber, entailing physical traces of and responses to the landscape within the artwork. http://bridgethillebrand.com

Sara Bowen, founder of the International artists’ group Book Art Object, talked eloquently on artists’ books and affect theory, handing round examples of physical books for the audience to peruse and interact with whilst she talked, which was much appreciated. 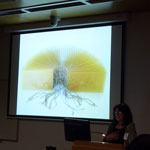 In the afternoon, Collaborative Practice presentations included a warm and entertaining talk by Adele Outteridge and Wim de Vos of Studio West End, covering their history of collaboration from 1992, through to their current works and practice. Jenny Fraser of cyberTribe, an online gallery project that promotes the work of Indigenous Artists internationally, presented works including Travelling Light in relation to the Traditional Owners of the lands of Queensland and cyberTribe’s use of artists’ books to overcome cultural oppression.
http://jennyfraser.blogspot.com.au / http://www.cybertribe.culture2.org

Fiona Dempster, Calligraphic and book artist, presented on collaborative projects with the artist Susan Bowers under their working title “Pas de deux”. You can see examples of these at: http://fionadempster.com/gallery/collaborative-work/

Kym Tabulo presented her book The Drift of Impure Thoughts in two editions, a finely bound, slipcased version and a ‘silent abstract graphic novel’ version – both of which employ a series of abstract images sequentially juxtaposed to create visual narrative. See more at: http://www.blurb.com/b/5761710-the-drift-of-impure-thoughts

A plenary session with open audience discussion concluded the conference part of ABBE, with some great conversations around the presentations we had seen and future plans for artists’ books events in Australia – watch this space as it was an energetic half hour with many suggestions, and I think things will be moving swiftly ahead!

It wasn’t over yet though, there was still more to come. Saturday saw a tour of QCA library’s artists’ books display, a visit to Grahame Galleries and Editions, the artists’ books collection at Queensland State Library and Studio West End. Then back to QCA for the rest of the day to spend time at the Artist’s Book Fair which was chock full of amazing books by Australian artists. It was a great opportunity to handle and enjoy works by artists whose books I was familiar with: Lyn Ashby, Caren Florance, Tim Mosely, Angela Gardner, Studio West End etc. and those whose work I had never physically seen but had admired from afar – literally; Marian Crawford, Clyde McGill, Deirdre Brollo, Brad Freeman who had a table with his own books, and works by regional artists that were new to me cyberTribe’s publications, books from QCA staff and students, and a chance to see the collaborative books of Sue Anderson and Gwen Harrison. Anderson and Harrison’s books are exquisitely produced, hand printed and bound large-scale works whose visual appeal and tactile quality belie the harrowing contents within. Socially and politically charged, their books draw the viewer in as they narrate historical, factual accounts of lives abused and lost in both historical (HOWL FOR A BLACK COCKATOO) and present day (Shore of Certain Happiness) Australia. If you should find yourself with the opportunity to see these books for yourself you should grab it with both hands – UK readers, note that “Shore of Certain Happiness”, and “Dancing Over Dark Waters” were acquired by the British Library in March 2014 for their collection. You can see a video of their work: BBC Report 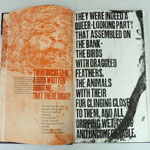 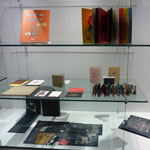 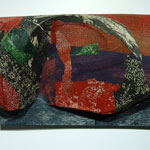 The whirlwind of artists’ books activity ended with two exhibition openings, A Flurry of Leaves at Impress Printmakers and Tim Mosely’s exquisite solo show ‘the touching eye’ at Bosz Gallery. ABBE in its entirety was a feast for the eyes, ears and hands, and I was thoroughly delighted to be part of it. I am also looking forward to seeing what emerges next; I have the feeling that ABBE was just the beginning of a conversation with the international field from within Australia, and a hugely important one at that. For those not as fortunate as me, the papers presented at ABBE are being put forward to Freeman’s JAB to be published as a special issue on Australian Artists’ Books so look out for that as a future edition (http://www.journalofartistsbooks.org).

Congratulations to Tim Mosely and all involved at the Griffith Centre for Creative Arts Research at Queensland College of Art, for providing a significant platform for discussion and contextualisation of contemporary artists’ books practice in Australia.