Frans Baake NO WHERE – NOW HERE

A BOY’S DREAM
In 1971, when I was 12 years old and lived in Stad-Delden, The Netherlands, the world reached only as far as the nearest town of Hengelo. In my childhood I was keenly interested in islands; at an early age I was already aware that there could be such remote places. There was simply no way of actually visiting them, the knowledge itself of their existence had to suffice.

In the weekly magazine KIJK, I read an article about a volcanic eruption on the far-away island of Tristan da Cunha in 1961 with the evacuation of the entire population, and also about their return two years later. I couldn’t get this story out of my head. For many years my love of islands loitered in the background. It only really took off in 1983 when I first set foot on the Faroe Islands; barren, misty, tree-less and lots of rain – an ideal setting for the visual language that I would later develop in my books and graphics. At that time, I had just finished Art School at the AKI in Enschede and was at the Rijksakademie in Amsterdam. Throughout the years many more visits to remote islands took place, for instance the Aleutians, Falklands, St. Pierre & Miquelon, Greenland. Also, smaller nearby islands had and still have my interest. I sought shapes and forms that I could relate to in these isolated places, transforming them into a clear visual language. I used wood- and linocut, letterpress, collage, drawing and photography and gathered the pages into books and bound limited editions. I have presented these at fairs, events and exhibitions in The Netherlands and further afield. For many years I have worked together with the gallerist, curator and dealer Johan Deumens who specialises in artists’ books and editions. Thanks to him the books have found their way to international museums and collections.

In the distance Tristan kept calling. If asked: ‘Which island would you most like to visit?’ I of course had a ready answer. From 1971, I began reading all about Tristan da Cunha.
The dream of actually visiting the island stayed alive for 46 years. In 2017, the wish was granted. Thanks to a Working Grant awarded by the Dutch Mondriaan Fund the journey could finally take place. 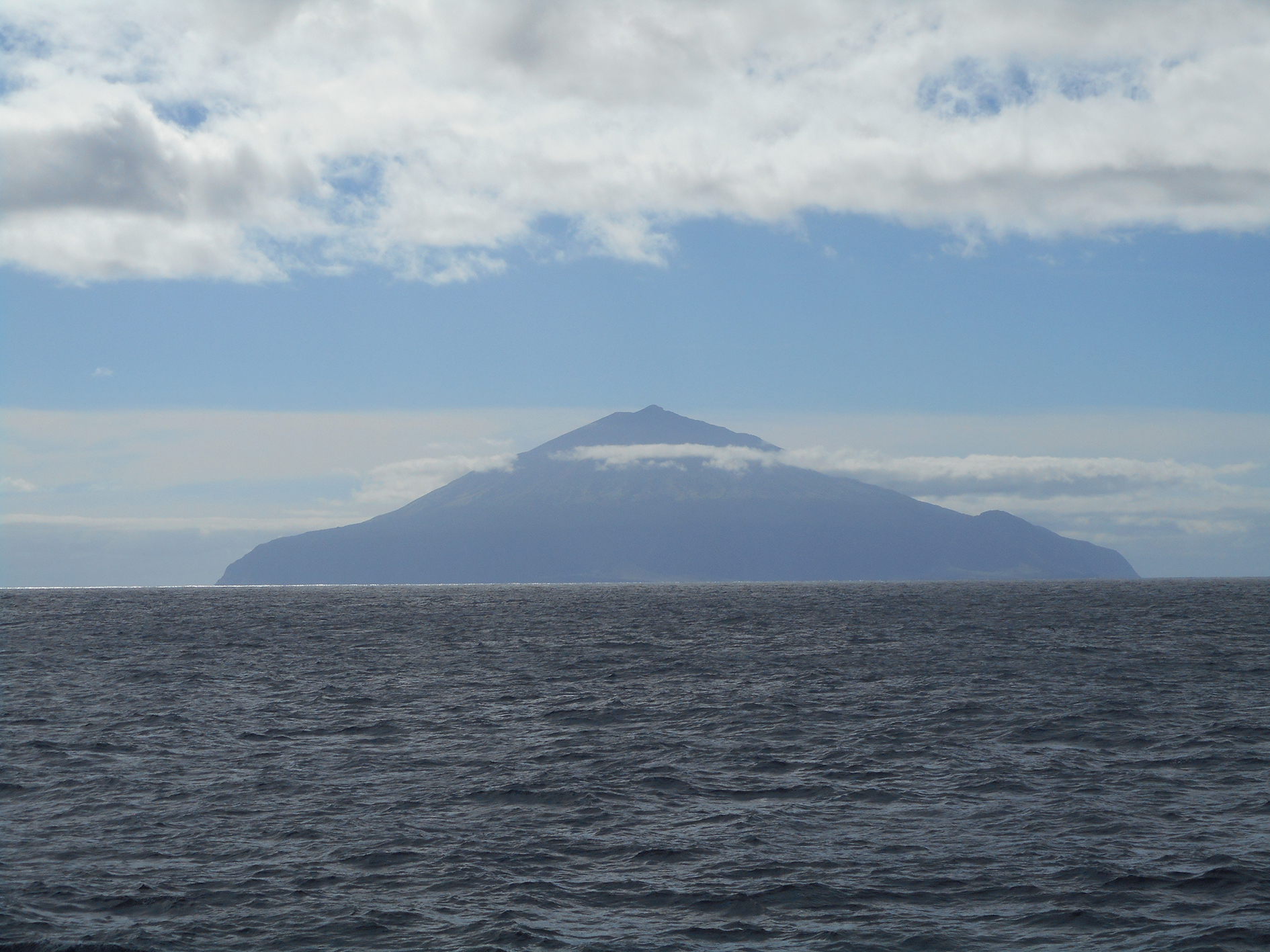 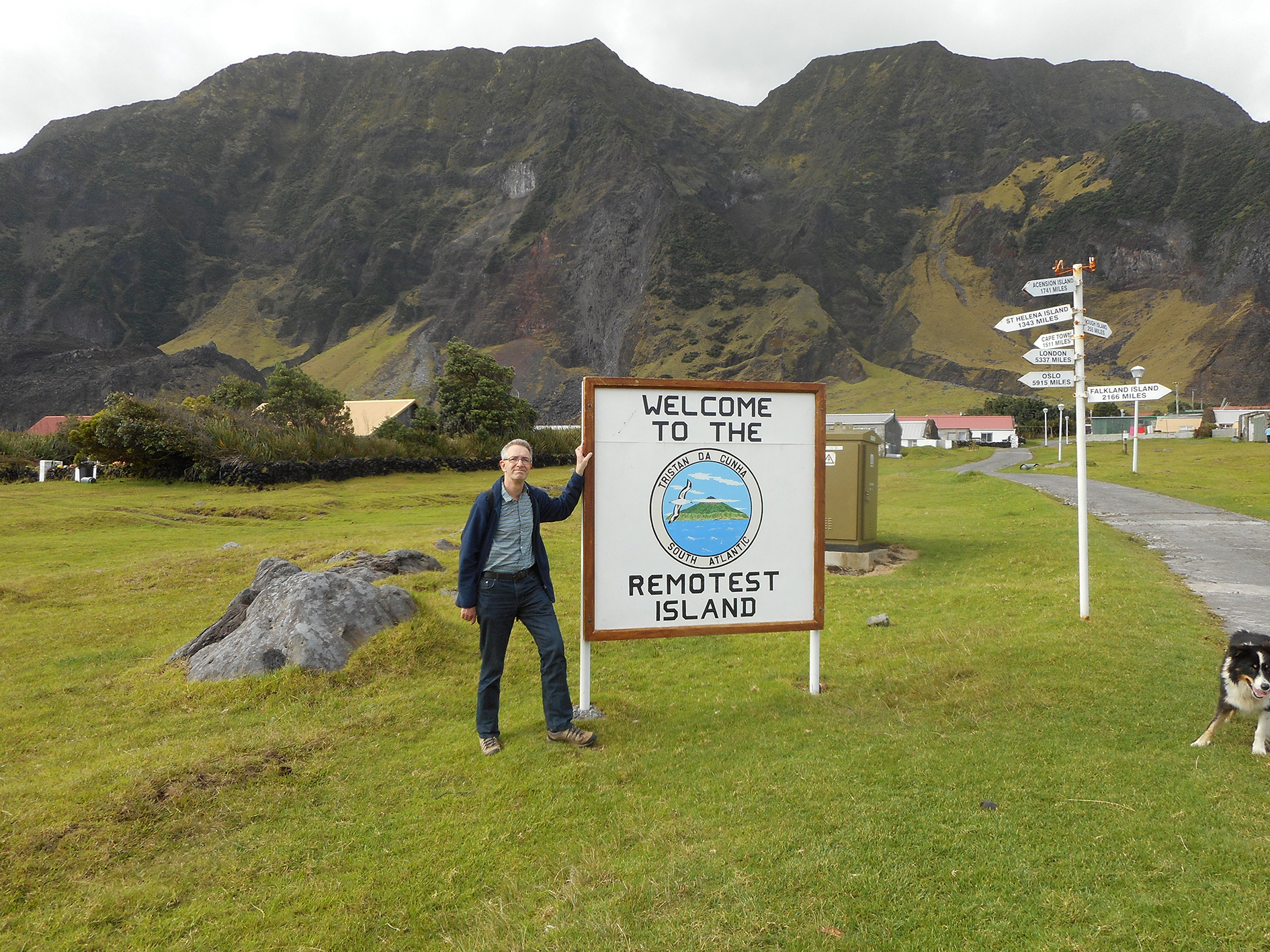 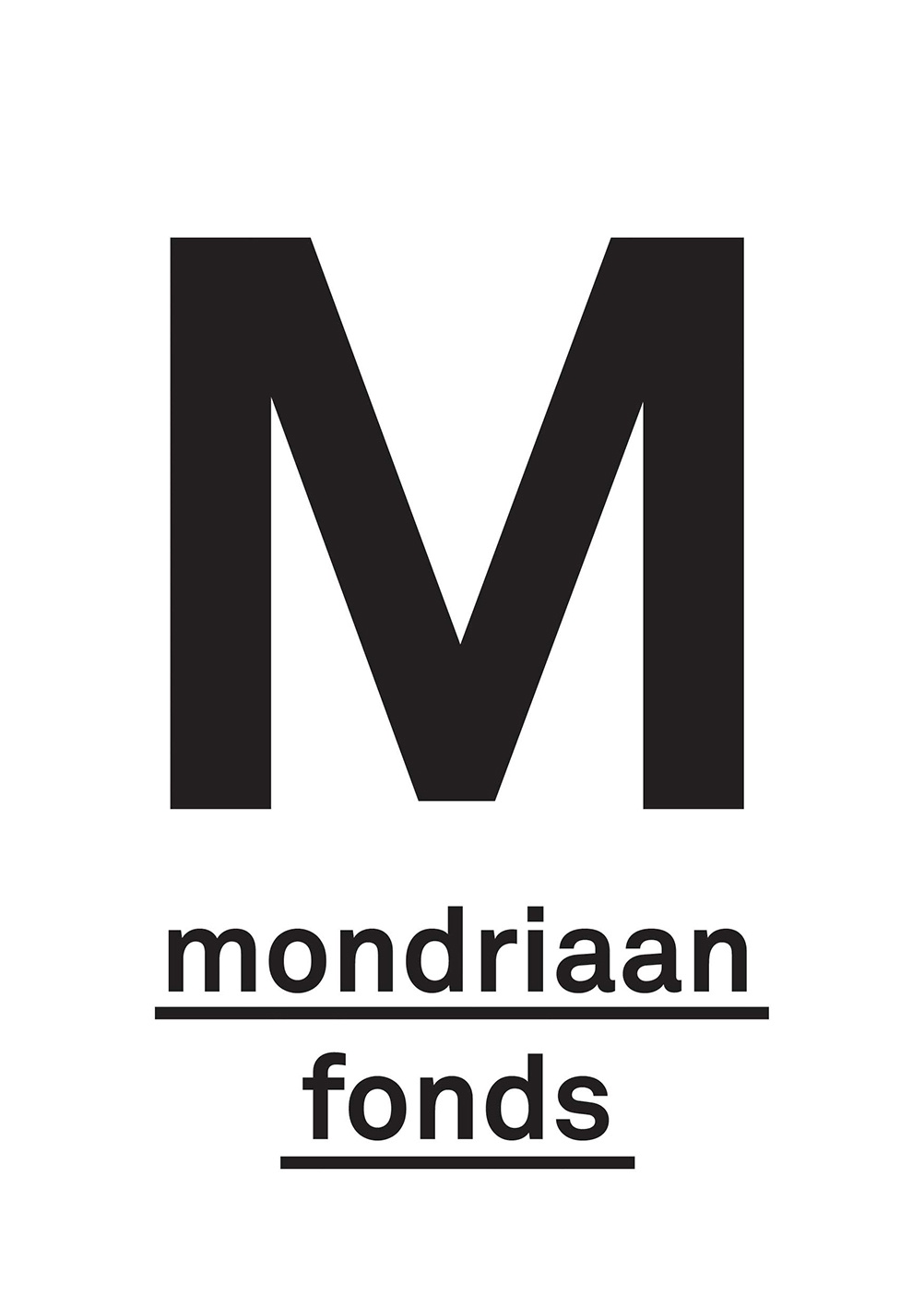 THE ISLAND
Tristan is a volcanic island, an isolated speck of British territory situated in the middle of the Southern Atlantic Ocean. The distance to the nearest mainland is more than 2,800 kilometres. Its top reaches the sky at over 2,000 metres. All 262 inhabitants live on a flat piece of land in the only settlement, which is called the Edinburgh of the Seven Seas.
Isn’t that a wonderful name! They live off lobster fishing for export, growing potatoes and issuing their own stamps. Just seven surnames (Glass, Green, Swain, Rogers, Hagan, Lavarello and Repetto) show the international mix of its descendants. There is no airport; the island is far away from cruise routes and is visited by boat just a few times a year.

MY CHANCE
At the end of March 2017, I boarded MV Plancius, a ship that sails under the Dutch flag and makes expedition cruises in the Arctic and Antarctic. Once a year the ship sails from the southern to the northern hemisphere and en-route visits some remote islands. The voyage takes 34 days and covers a total distance of more than 10,000 kilometres. With 45 passengers from all over the world, and the same number of crew, after two weeks sailing we anchored at Tristan da Cunha. The chance of reaching the island is only 65%. Often a landing is impossible because of unfavourable weather conditions. After our first landing attempt failed, we struck lucky. The waves splashed over the Zodiac dinghy, and on arrival we were welcomed by some locals. Together with Lok, a Chicago-based engineer, I walked all over the island. We had the whole day to explore: the crater at the top of the volcanic eruption of 1961, the village and the potato patches four kilometres beyond. At the end of the day we were given a personal tour of the lobster factory. The question that arises of course is: What was the impact of this place on me after so many years of dreaming? Of course, the feeling was euphoric: Me! Here! Now! There was also the urge to capture all the images I wanted. Chatting companionably, we walked along all the places that I had already known for such a long time and at the same time didn’t know at all. We talked with the locals, who were happy to meet some people from the outside world. I realised there is a huge difference between experiencing from a distance and taking part in reality.
In conclusion, it was what it was, and that really was quite something. People live all over the world, but on this island they all live in just one village. For them the difference is that it is a week’s sailing if they want to get in contact with the rest of the world. They don’t feel lonely, as far as I can tell. That’s just an outsider’s view. 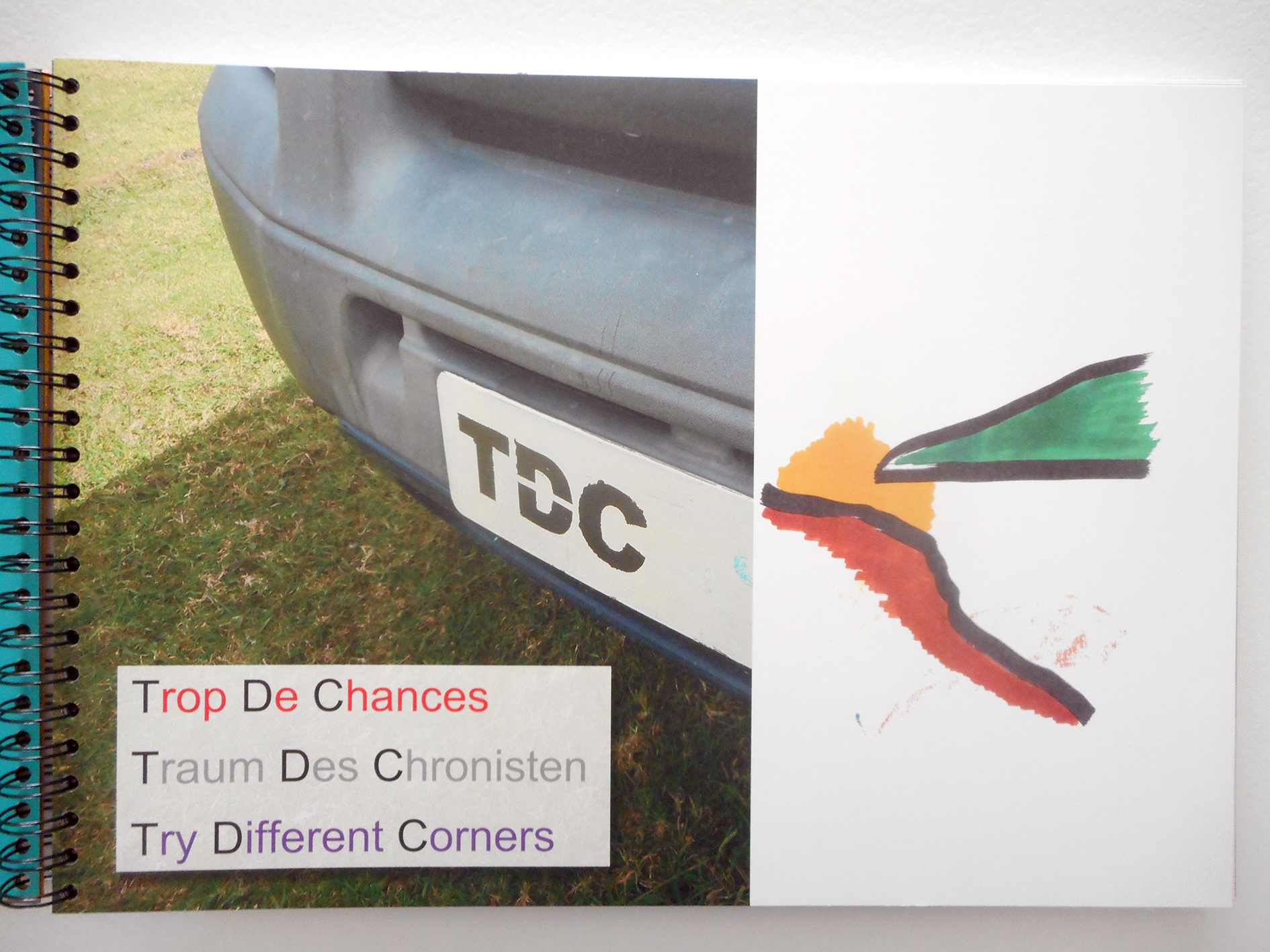 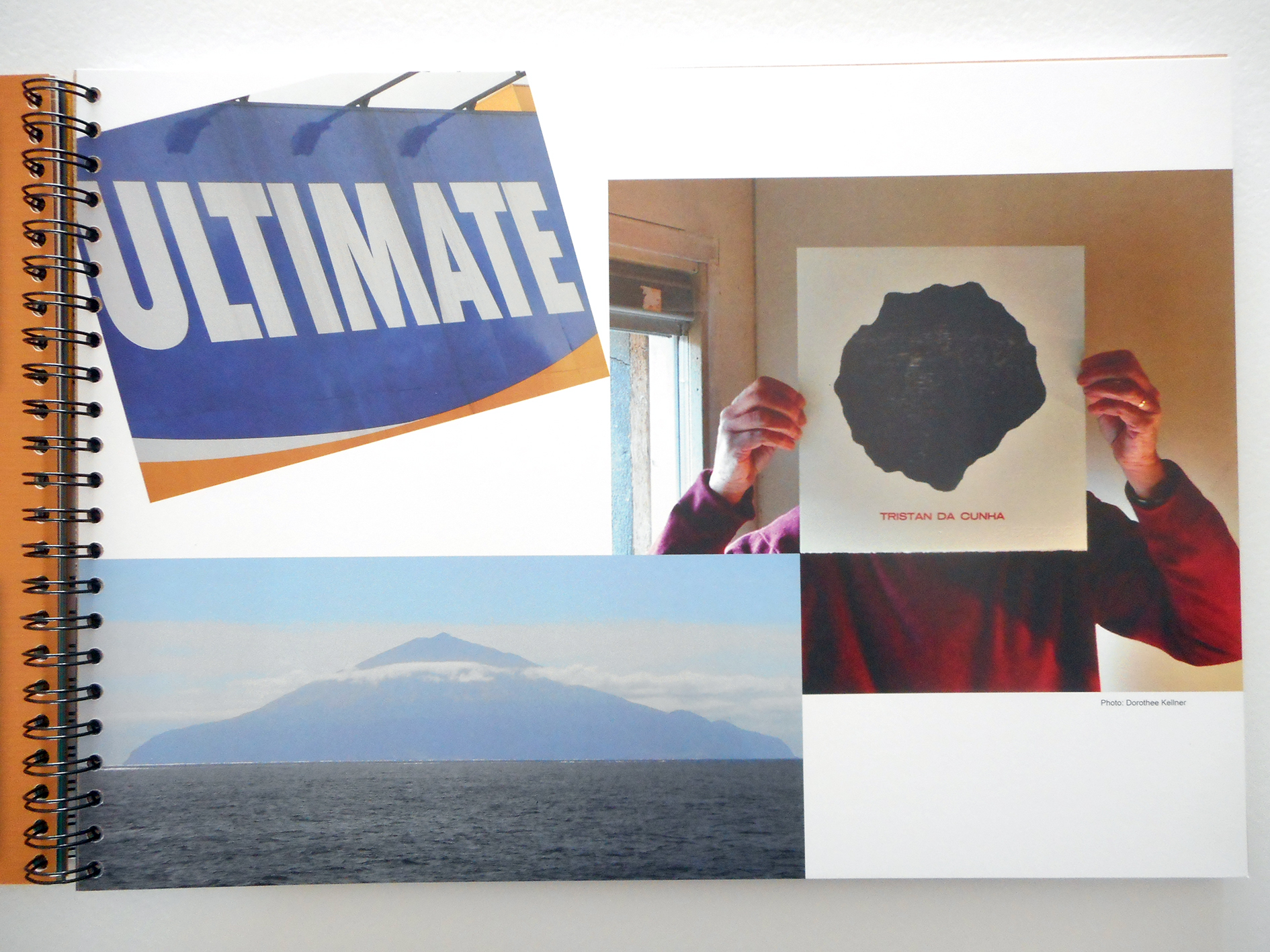 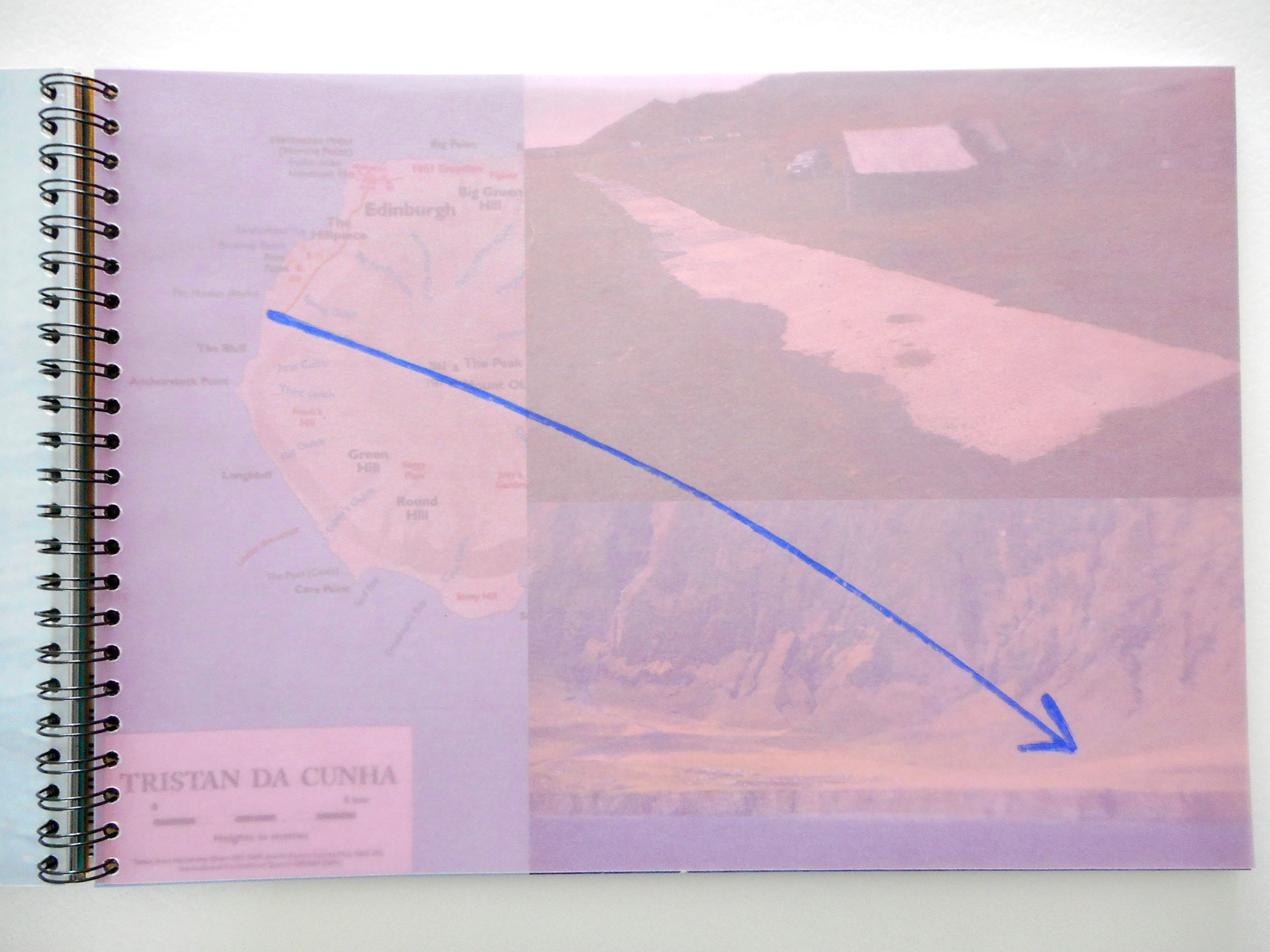 NO WHERE – NOW HERE
The book I made based on this trip is entitled ‘No where – now here’ and in fact is not ‘about’ the island. Above all it aims to give an impression of my own journey: the desire to go once, to an island beyond the horizon, a ‘destination of the mind’ and finally, to set foot on that island: there, once and for all time! Between the initial desire and actually going 46 years passed: a considerable length of human life, in which all those things that you might expect to happen over such a long time, have happened. The island waited patiently, and now the journey has been made. From time to time I stare at the large IKEA wall-map and look at the tiny dot in the infinity of the ocean and think: ‘Now I know!’

Visit Frans Baake’s website for more information on his work.