Tim Hopkins / Half Pint Press: The Book of Disquiet and Imaginary Letters

Tim Hopkins will be showing two bookworks: The Book of Disquiet by Fernando Pessoa (2017), and Imaginary Letters by Mary Butts (2019).

The Book of Disquiet by Fernando Pessoa

The texts that make up The Book of Disquiet were found in a box in Pessoa’s room after his death in 1935. I took the form of bundles of manuscript and typescript fragments in no fixed order. It consists of the everyday thoughts of a single character, Bernardo Soares. The book was first published in Portuguese in 1982, and is now widely regarded as a modernist classic.

This edition responds to the original’s form, or lack of form, by restoring disorder to The Book of Disquiet: the fragments are to be picked out as the reader pleases. This reflects the origin of the text itself and also makes possible connections between fragments which may be less available in a bound, ordered edition; Soares was prone to letting his mind wander during long nights in his room and the book gives a sense of that wandering mind.

The Half Pint Press edition of The Book of Disquiet takes 61 of the hundreds of fragments, and presents them unbound and with no fixed order in a hand-printed box. Each fragment was typeset by hand and printed by hand on an Adana Eight-Five tabletop letterpress in an edition of 80.

It writes Soares’s ideas across the everyday detritus of a life lived, on objects as diverse as a postage stamp, a compliments slip, a booze label, a page of accounts and an internal transit envelope. Not all the objects are paper: the box includes a pencil, a lollipop stick and a matchbook. Some are beautiful, others grubbily everyday. Likewise the box, which is deliberately not a cloth-bound fine press production but instead hand-printed on a commercially-available stitched board box.

The impression is of a box of belongings, each with a value of some kind to the owner. Each may be kept because it’s beautiful, or important, or useful, or attached to a memory: there is a melancholy sense of sifting through the relics of a life lived, full of unreachable connections.

This edition won the MCBA Prize in 2017. 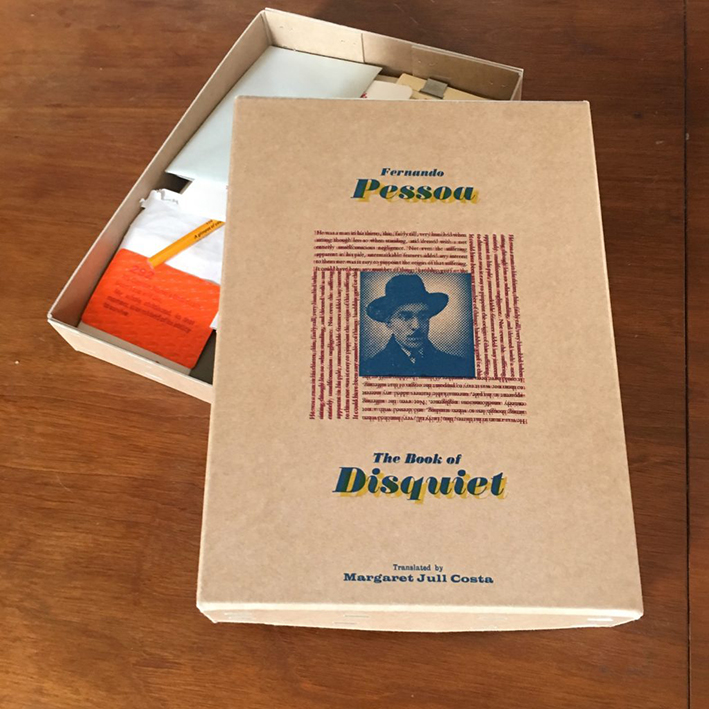 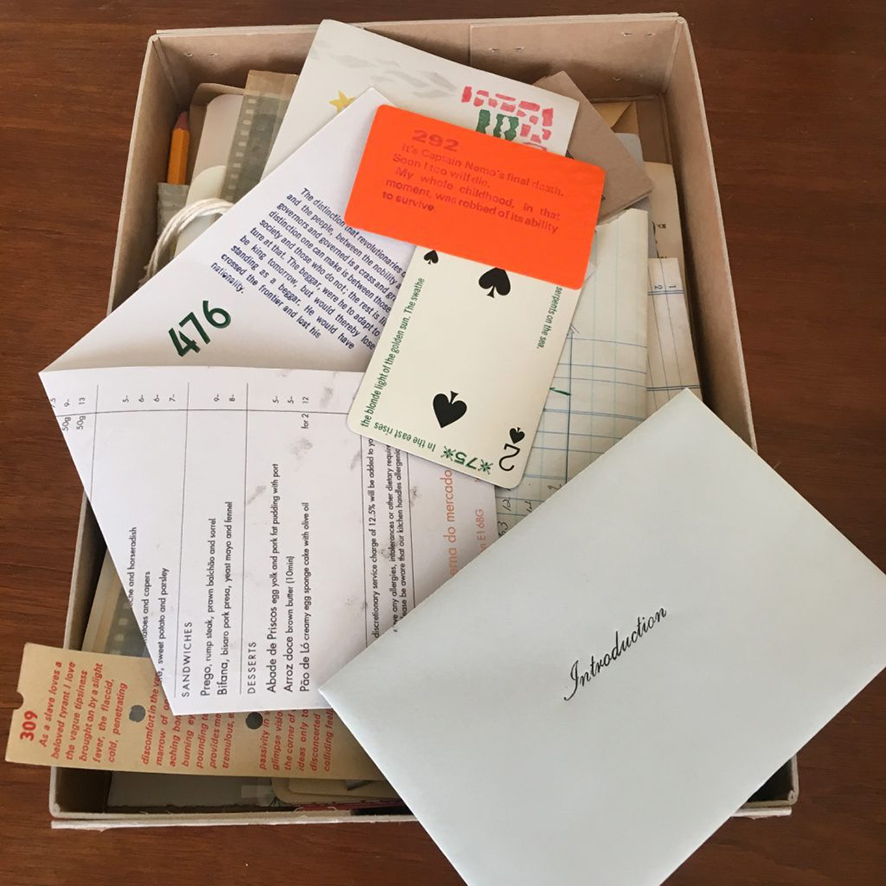 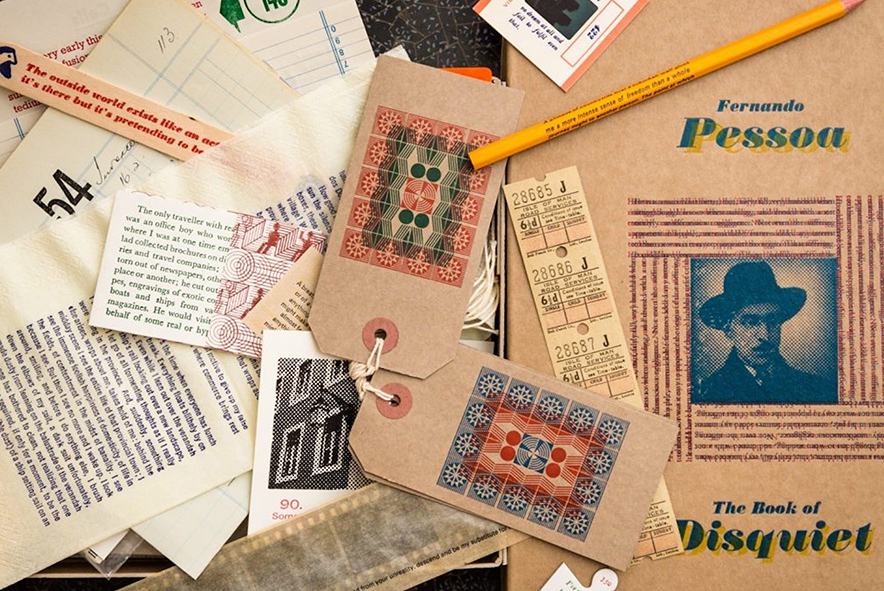 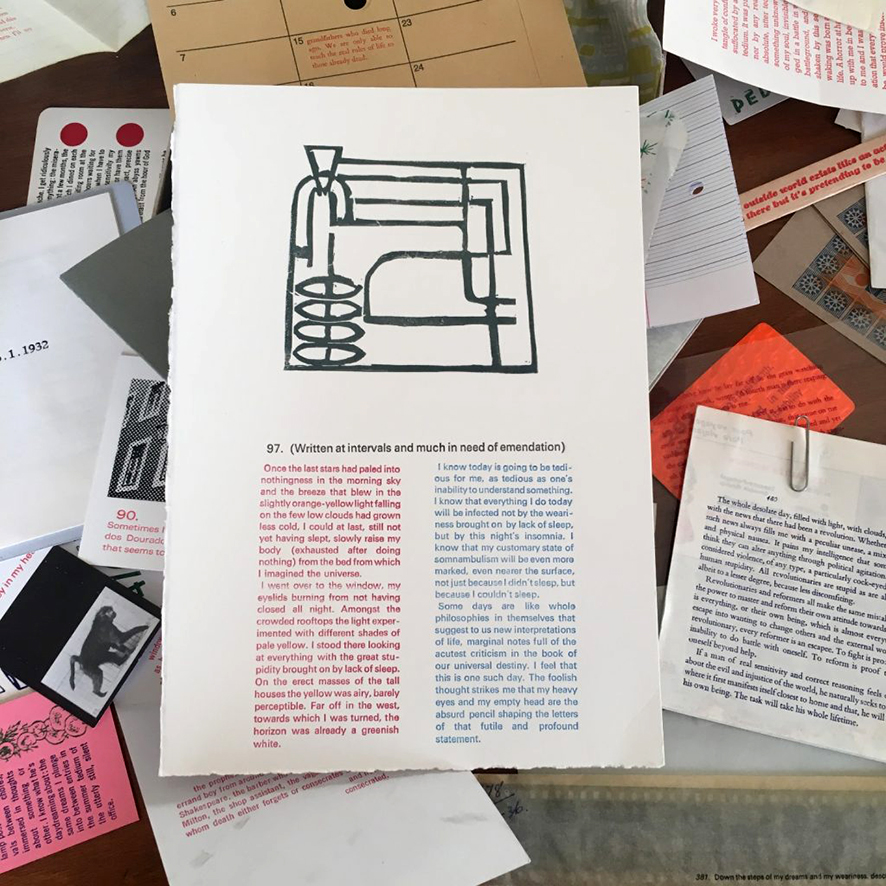 Imaginary Letters by Mary Butts (with decorations by Lupe Núñez)

This will be the first exhibition of a new work from the Half Pint Press, to be published later in 2019.

Mary Butts (1890-1937) was an English modernist who published several novels and short stories. Imaginary Letters dates from 1928, and takes the form of eight letters addressed (by an unnamed narrator) to the imagined mother of Boris Polterasky, a White Russian exile living a bohemian life in Paris. The narrator loves Boris but it quickly becomes clear that Boris’s interest lies elsewhere.

This edition presents each letter in the novel separately, each set differently and printed on different stock. Illustrator Núñez has provided a mixture of decorations and “modernist marginalia”. The form of each letter helps to reflect the passage of time and the changing mood of the book as it progresses; not all are easy to read, and there is a feeling of someone’s notes to themselves, held keepsake-style for posterity.

Each letter is presented in an envelope and the envelopes held by a ribbon into what seems to be a cloth-bound book (with unique endpapers by Jenn Phillips-Bacher).

The text of this edition was typeset by hand and printed using an Adana 8×5. The decorations were also printed using the same press (with one exception which was screenprinted). 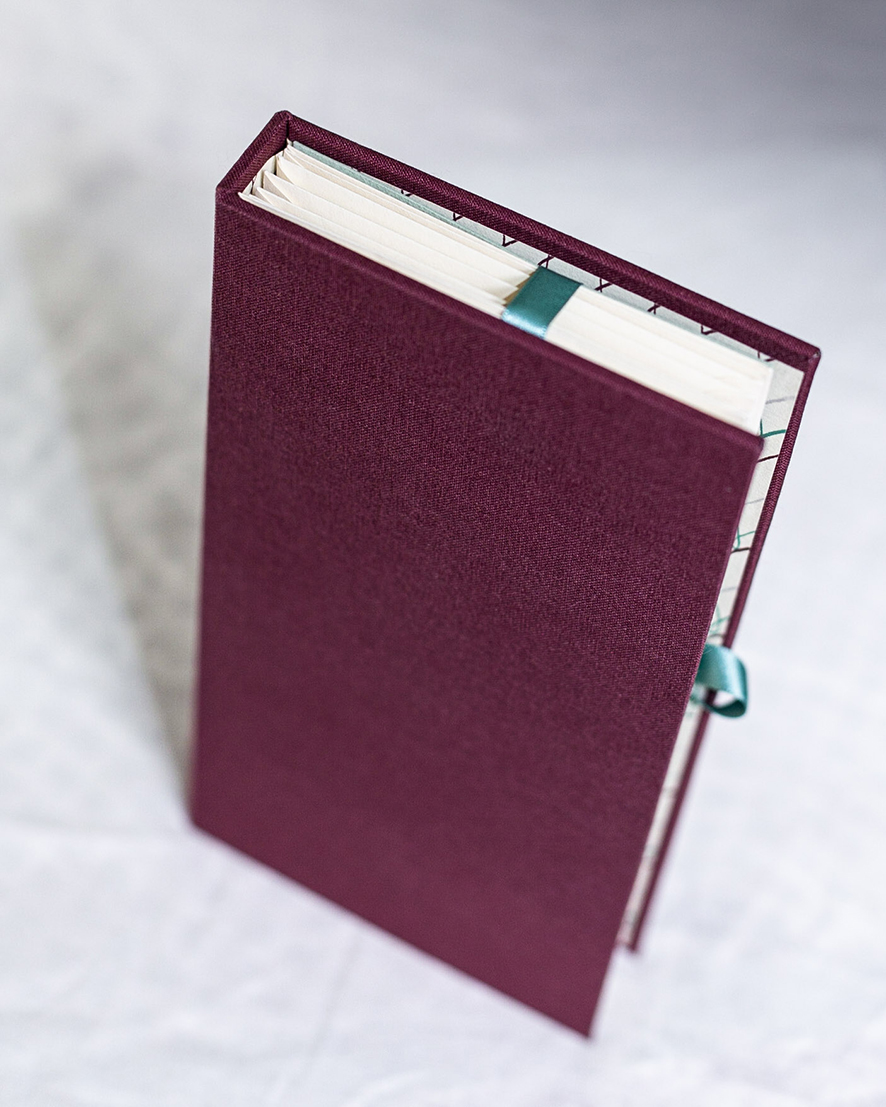 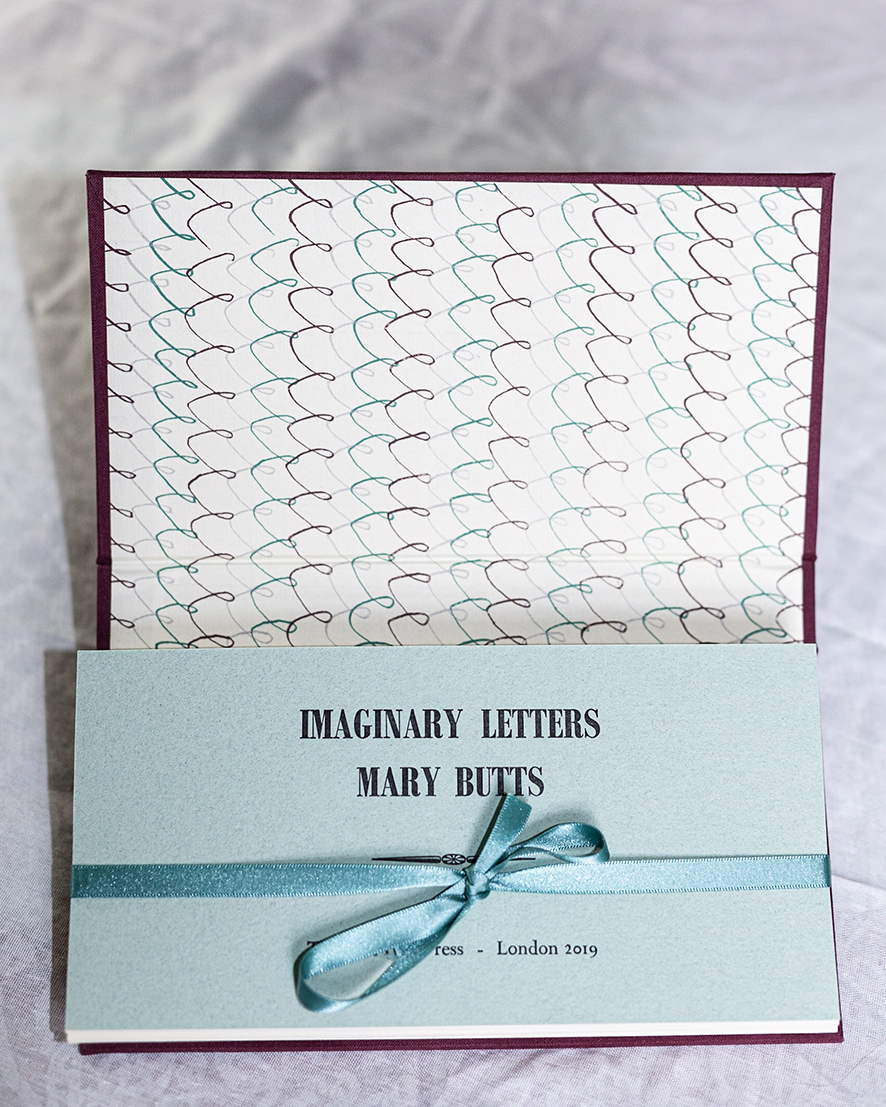 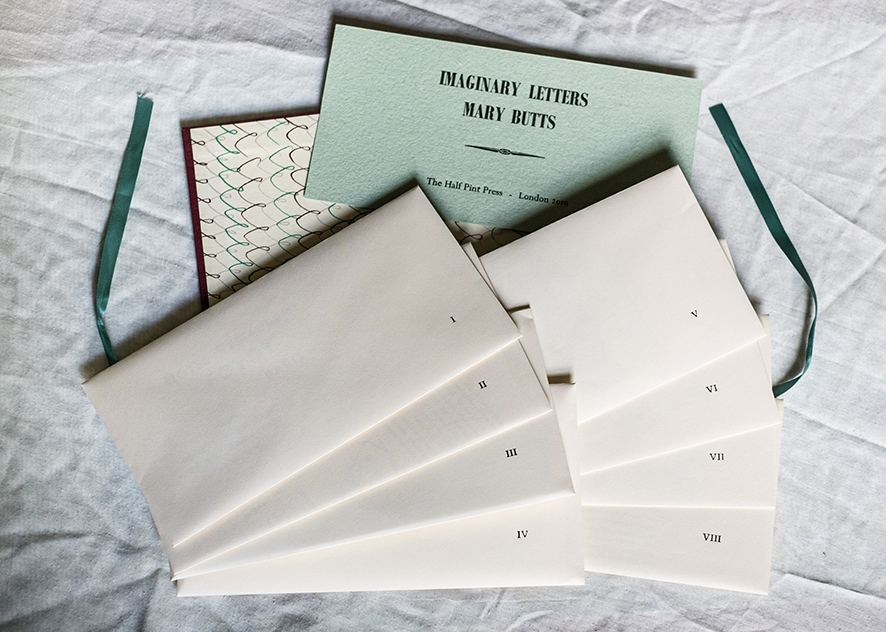 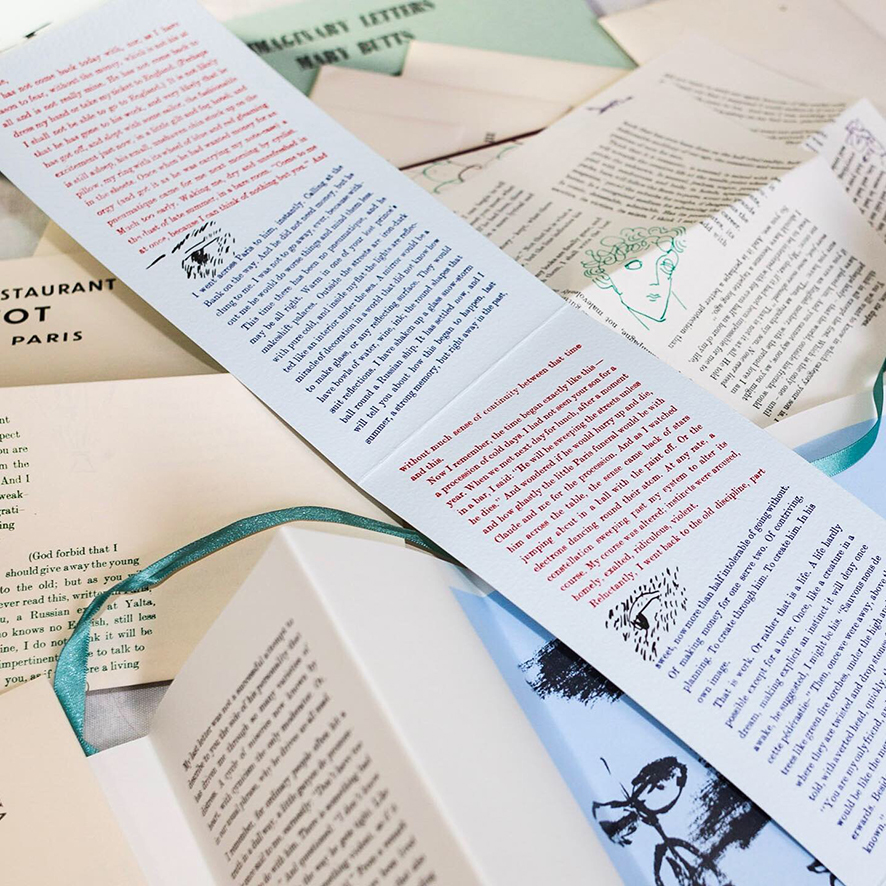 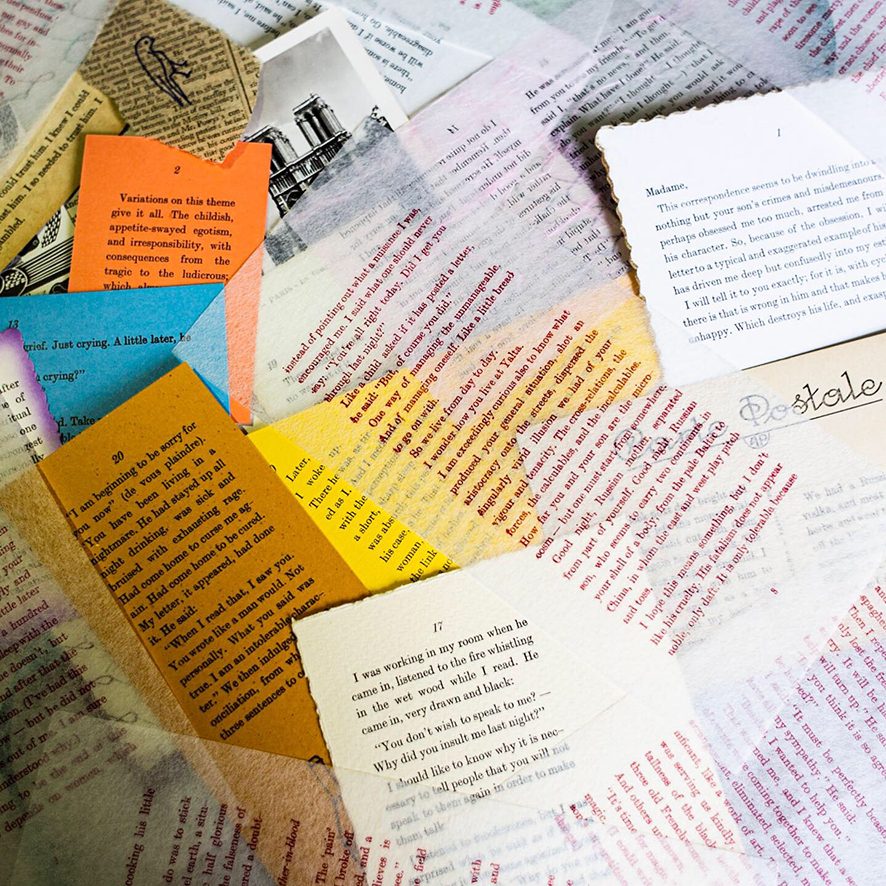 Tim Hopkins will be talking in person about the work in his exhibition at UWE, Bristol, Bower Ashton Library, on Thursday 28th November 2019 between 12-1pm. This is a free, public event and all are invited to attend.