He published his first short story in the quarterly magazine Keshet in 1968. From 1968 onwards he published and contributed short stories, poems, journalism, criticism, essays on art, literature, poetry, cinema and culture in various national newspapers and magazines. His first book of poetry Clouds Carving Forms was published by the Hakibbutz Hameuchad Publishing House in 1969. From 1980-81 he was awarded a British Council Scholarship to study in the UK. As artist in residence, he set up his studio in the Fine Art Department at Leeds Polytechnic (now Leeds Metropolitan University). His publication To Make Things formed part of the exhibition Meir Agassi – works 1980-1981.

In 1982 he settled in the UK, moving to Bristol where he lived with his wife Tessa and their son Danny, and continued to make art, and write essays, poems, short stories and articles for Israeli magazines and newspapers on a regular basis. His first novel The Black Hills of Dakota was published by Zmora-Bitan Publishing House in 1987.

He began to develop the idea of setting up the Meir Agassi Museum® from the early 80s. After meeting the artist Annette Messager in 1992, and discussing the problems of diversity, he began to use a slogan to consolidate his varied practice: "Work from the Studio, Archive, Collections, Diaries, Library and Museum of Meir Agassi".

Agassi produced his special publication The Case of the Lost Life and Work of Mo Kramer (1920-1993) as an installation for his final show at the (then) Faculty of Art, Media and Design, UWE Bristol in 1994, for which he graduated with first class honours – and also received the Rebecca Smith Award. In 1995, he re-installed the piece for an exhibition “Neither Here Nor There” curated by Michal Heiman, at the Gordon Gallery in Tel-Aviv. In conjunction with the exhibition he produced two more publications: The Mo Kramer Box of Fragments from Memory and Amnesia , and An Anthology of Fragments from Memory and Amnesia , a booklet in Hebrew containing selected texts on the preparation of the “Case of MK”.

After graduating he continued to publish artists’ books, ideas, essays and related works under the Meir Agassi Museum® umbrella, often collaborating with his friends. He was very well known in Israel as a writer and artist, and was known more for his art in the UK. Agassi was a generous artist and, along with his wife Tessa, welcomed many artists into their home – always connecting people who he thought would be interested in each other’s work and sharing books and artworks with his friends.

Meir Agassi, his wife Tessa Agassi-Smith and their son Danny were killed in a road accident in February 1998. This collection of Meir’s work given by him to his friends here, has been housed in the Print Centre at UWE, Bristol since then as a memorial to the family. The books have been scanned to show some of the wonderful artworks produced by him in the period that he lived and worked in Bristol, to a wider audience.

The Mishkan Museum of Art, Ein Harod in Northern Israel has a complete collection of Meir Agassi’s artwork in their collection.

In 2009, we established the Agassi Book Arts Prize, awarded to one artist at the MA Multidisciplinary Printmaking Degree Show, to continue with these tributes to their memory. Congratulations to the MA Multidisciplinary Printmaking student Chrystal Cherniwchan who has been awarded the 2019 Agassi Book Arts Prize for her installation mishappenings.

“With my interest in citrus, machines/technologies, me/human interaction with these objects from nature, I was thinking about experience and event, in the way I would create ‘happenings’ to document or to fictionalise a moment, and how the event, the participation and interaction, forms an intimacy towards discovery and knowledge. The viewer travels in and out of images, text, and quotes around ideas related to the larger body of work I have been making this year. The book is bound and shown in a presentation box made for the degree show.” 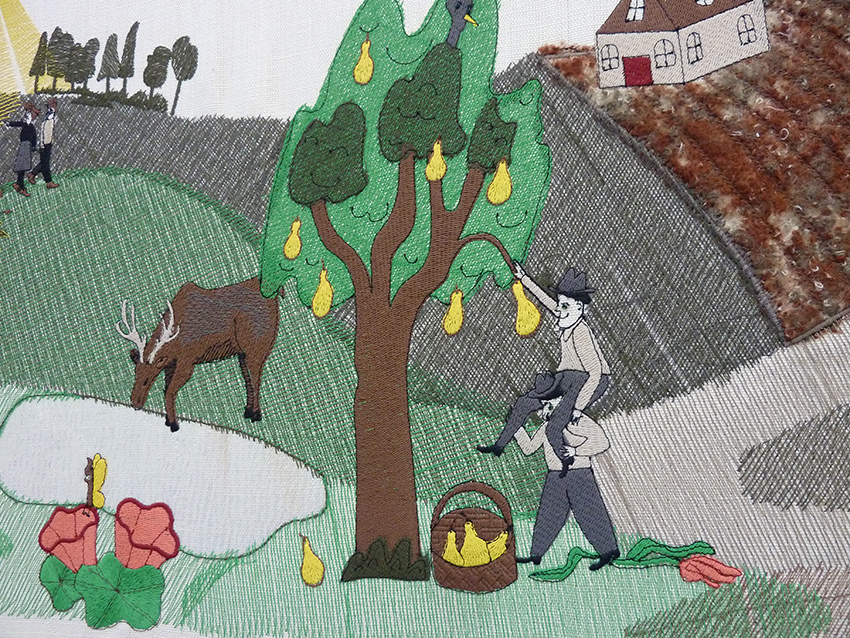 Congratulations to MA Multidisciplinary printmaking graduate Lisa Davies who has been awarded the CFPR’s Agassi Prize for 2018. Lisa’s bookworks range from the one-off piece For Love, made specially for the Bodleian Library’s Medieval Book exhibition project, to tiny zines to be read inside her witch’s hat tent at degree show.

Lisa has been awarded the prize not only for her bookworks but also the magnificent embroidered tableau Making Amends,
which she has made to enter into the Hand & Lock ‘Material Alchemy meets Modern Morality’ competition. We are sure Meir would have approved, Lisa has definitely become ‘a textile alchemist’. 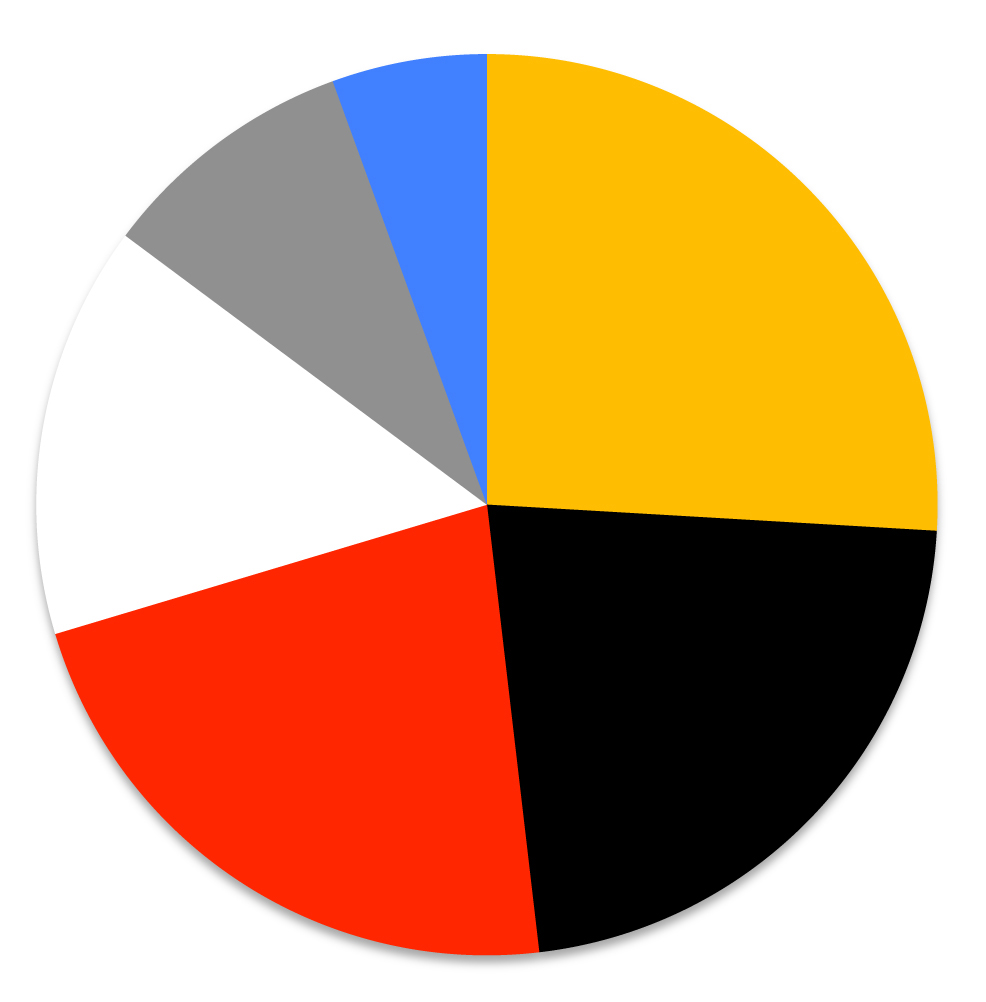 Linda Parr, who works with books, data, text and image has been awarded the 2017 Agassi Prize by the Centre for Fine Print Research.

Linda’s pared down investigations in seventeen words have enlightened readers on topics from Tudor history to the Loch Ness Monster. Her final show included a series of digital and screenprinted works evaluating colour in literature, including:

Candide
Adjectival colour
in literature
alters the tone of writing,
and subconsciously
affects the
mood of the reader. Congratulations to MA Multidisciplinary printmaking graduate Jude Lau who has been awarded the CFPR’s Agassi Prize for her installation ‘Printed Matter’.

Jude’s installation involved the creation of a book of ‘instructions’ and a composition for a resin record made from live recordings at the print studios of the University West of England and the Printhaus, Cardiff. You can hear the resin records online at: http://bit.ly/1PzALBr

Congratulations to MA Multidisciplinary Printmaking student Monika Rycerz who has been awarded the Agassi Book Arts Prize for her degree show installation
Everyone dreams. 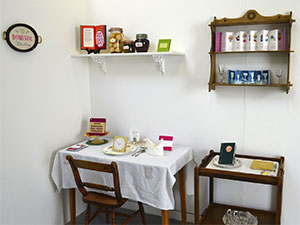 Corinne Welch was selected for the 2014 Agassi Book Arts Prize for her degree show installation ‘The Domestic Miscellany’.

‘The Domestic Miscellany’ is a collection of handmade books, documenting household advice from a bygone age. ‘Inspired by my own collection of antique books, I have used this final year project to explore combinations of low tech and digital printmaking alongside different binding techniques for cloth-bound books. The scalpel has been my tool of choice throughout – cutting paper for collage and stencils, carving rubber stamps, and creating the book structures from paper, board and cloth. My aim has been to use illustration as a form of documentation, recording these voices from the past for a new audience, before they are lost to obscurity.’

Congratulations to Hazel Grainger who was awarded The 2013 Agassi Book Arts Prize by the Centre for Fine Print Research for her degree show installation at UWE’s MA Multidisciplinary Printmaking course. 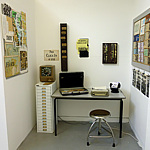 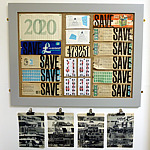 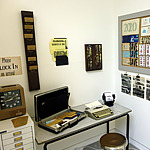 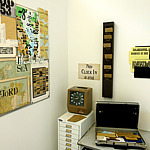 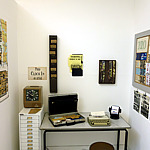 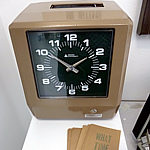 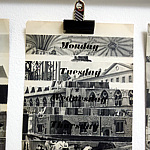 Hazel says of her work

My work is led in part by a visual way of gathering and processing information, as well as a reaction to events, objects, and items of discarded ephemera I have collected. Often these materials are the starting point and I will reflect on a small aspect of one and the mental connection I have made from this to another item, a conversation, or the aesthetic of a piece of letterpress type, for example. On other occasions the initial idea might come from the printing process itself, something I have observed happening in a previous printing session will become the main focus of a new piece, incorporating one of the materials I have selected.

The main themes of my practice are looking at ideas of information, communication, methods of conveying data alongside the methods we use to encrypt it – codes, symbols and translation, and the language of everyday experiences. I am also interested in the concept of performative data, information being created and recorded by an action, such as the clocking in machine featured in my degree show. I have a focus on analogue print processes and enjoy the way that using a slow technology such as letterpress gives me time to process an idea as I go along, making on the spot decisions or changing my mind mid-way though. I am a firm believer in thinking by making and I think this is the print equivalent of that approach.

The 2012 prize has been awarded by The Centre for Fine Print Research to the MA Multi-disciplinary Printmaking student Jane Sasanow for her text and image works produced over her final year of study. 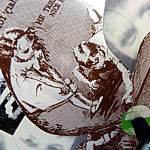 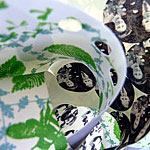 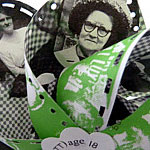 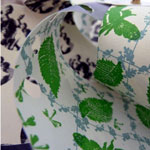 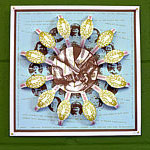 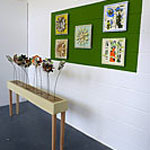 My area of interest is in the socialisation of children. How boys and girls grow into men and women who adopt certain roles, who have certain interests and conform to certain stereotypes. My observations come from my upbringing as the only girl in a family with three older brothers, being a teacher in a mixed comprehensive school for over twenty years and having a son, a daughter and four stepsons. I look for material for my prints in old children’s books, from the annuals from the early 1920’s to comic books that my own children looked at. I have also looked at how the media, particularly newspapers represent young men and women. I am particularly interested in how language is used as well as the visual representations of male and female.

I have also found myself drawn to collections of tangible objects: children’s toys which have a timeless quality, such as dolls, air fix kits and windmills. These objects are often mundane, but become special as soon as you pay attention to them, they often have associations and memories contained within them, that touches us individually if not collectively.

I have also explored print beyond two dimensions. I wanted to take printed paper and play with it, cutting and folding it, printing both sides and making artefacts with it. I think this goes back to how I explored the world as a child. I drew, cut and stuck things together and I have continued to do so into adult life.

The windmill piece is my response to the death last year of my aunt and my father. It is concerned with memories and personal history, faces which will only be known by the captions from photograph albums and vague memories. The windmill has a timeless quality and is evocative of childhood. 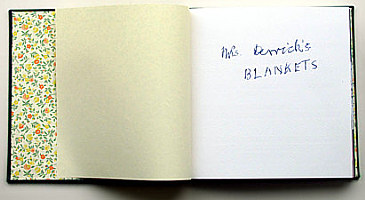 The 2011 prize was awarded by The Centre for Fine Print Research to the MA Multi-disciplinary Printmaking student Angie Butler for all her wonderful book works, especially as artist-in-residence at Miss Carol a small traditional hair stylists in Bristol.

Angie embraced this experience openly and has produced some beautiful books celebrating the salon, its staff and clients and brightening up the local area with her window installations over the last year.

Being at Miss Carol’s has led me to make a variety of book-based work evidencing the activities of local people and their surroundings. Among them: the Miss Carol Calendar, featuring June the resident window dresser’s last year of window displays before her retirement; Mrs. Derrick’s Blankets, a handmade book, celebrating the pastime of a 90 year old lady who has been crocheting blankets for her local Dogs and Cats home for over thirty years. 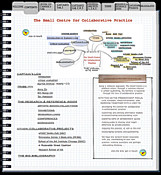 The 2010 prize was awarded by The Centre for Fine Print Research to the MA Multi-disciplinary Printmaking student Lilla
Duignan for her work around artists’
books as The Small Centre for Collaborative
Practice. Lilla is also the founder of ABC the Artists’ Books Club based at UWE.

The Small Centre for Collaborative Practice

Lilla Duignan is mistress of ceremonies, director and collaborator (also known as ‘Captain’) at The Small Centre for Collaborative Practice, founded by her in 2010 – to represent and document her own eclectic practice, and that of co-collaborators, collectively known as Tribe.

CFPR loaned its collection of artists’ books by Meir Agassi to the Amsterdam-based artists’ group Public Space With A Roof, for research and interpretation in producing Endless Installation: A Ghost Story For Adults (Encounters, Questions, Collaboration) by Public Space With A Roof, at SMART Project Space, Amsterdam, March 21, 2009 – April 26, 2009. 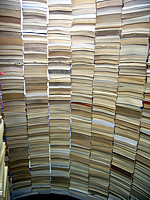 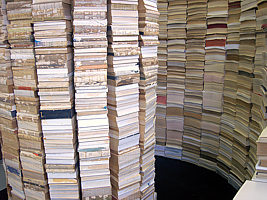 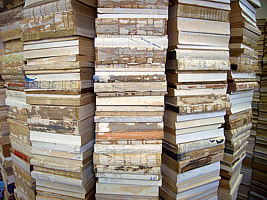 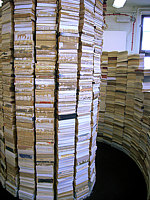