Information and downloads from the project

Before embarking on this research project I had assumed that the laser cutter’s strength lay in the fact that it could replace intensive hand cutting and scoring to assist in the production of book and paper based artworks. Written in the summary of my initial application for funding I stated: ‘This project aims to explore the potential of the laser cutter as a tool for artists working with the book form and paper-based work, and see how it can replace the need for labour intensive manipulation of paper and card by hand.’ As the project began and progressed I realised that yes, this is what a laser cutter can be used for, but it can also offer so much more to the artist and designer. 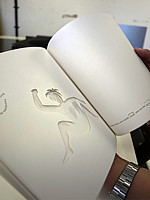 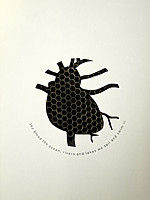 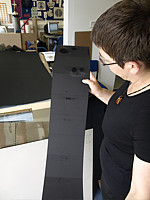 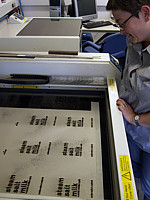 The work of Rob Ryan demonstrates that the laser cutter is a very good tool at recreating and replicating that which already occurs as a hand-cut artwork. Although not fully versed in his production techniques, I would suspect that Ryan first produces a hand cut original that can be scanned or photographed, and from this a digital file can be produced with relative ease that allows for facsimile copies to be made in editions on the laser cutter that look almost identical to the original. In the case of someone as successful as Ryan this allows for easy distribution and meeting demand, at a cost that makes it affordable to many. There is of course nothing wrong with this and it is perhaps rather obvious that the laser cutter can be used very successfully in this way.

As I helped the two residency artists for this project produce their work, and I began to explore the laser cutter as a creative tool in the production of my own work, I realised it had a lot more to it than just being a replacement tool. To fully utilise the laser cutter, I think as an artist or designer you have to embrace what the laser cutter can do for you. Burning or melting is a fact of the laser cutter and I feel that the more successful works I have seen embrace this, rather than trying to subdue it. Through computer design, it is also a fantastic tool for cutting very intricate marks and for repetition, again aspects that when embraced can only enhance a work. I hope that this is what is demonstrated by the works I offer elsewhere in this project of being good examples of the laser as a creative production tool, and also in what I have produced myself and helped other artists and designers to produce. 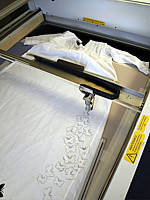 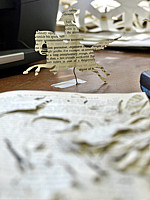 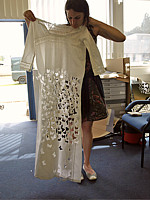 To cite a few examples of where I see what I consider to be an excellent use of the laser cutter, the first that springs to mind is the Make it Rain series of work produced by tattoo artist Scott Campbell. Exhibited in Miami in 2009 the work is a series of stacked dollar bills that have been cut as individual layers and arranged to produce very three-dimensional work, close in appearance to his tattoo work. What I particularly like about this work is the dirty nature of it that works so well with the imagery. The soot and burning that is the by-product of laser cutting works with and enhances the subject, be it text or image. The images are grimy, the money is used and grimy and the black residue from the laser keeps that grimy feeling too.

The next is the growing collection of books by the New York based artist Michael Mandiberg. Mandiberg has experimented with the laser in a few series of work, but the piece that works so well for me is the installation FDIC Insured. In this work, that he continues to add to, a range of ‘get rich quick’ books have each been engraved with a logo of one of the failed banks from the recent recession on the front cover with the laser cutter. Using the laser in this way, the logos have literally been burnt onto the books that Mandiberg picks up for next to nothing – as they are sold on, redundant. As with Campbell, the burn that comes from using the laser cutter has been embraced and used to great effect. The failed brand is now ‘branded’ into the failed books of, some would say, a failed system. 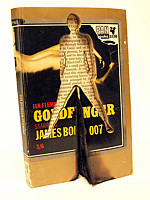 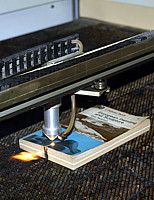 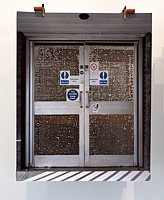 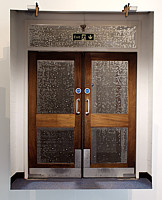 The work that I helped to produce for the residency artists I feel also demonstrates how the laser cutter can be used effectively and embraces what this technology has to offer. The works produced by Su Blackwell, in particular the nightdress for the Remnants exhibition at the Brontë Parsonage Museum, and the wedding dress for her solo show Happily Ever After at Long & Ryle in London. In each case, the ability of the laser to repetitively cut a detailed and intricate design enhanced the work and created a uniformity that at first glance may not have been altogether apparent. In the case of the wedding dress several designs were used, but repeated – with the dress being turned and different panels being cut. By cutting with a basic form of registration, Blackwell could respond to what the laser cutter did with each cut section, much as she would if cutting by hand; taking out and evaluating the dress and then, if more cuts were needed, returning it back to the laser cutter in the same position for more of the designs to be cut. The beauty of this work was, of course in how each piece was presented – suspended in the air so that the moths appeared to be flying out of the nightdress for the Brontë Museum exhibition, and the wedding dress for Long & Ryle suspended as if occupied by a human form with the weeds growing up and out of the dress – but the laser helped enormously in being able to get to this point. 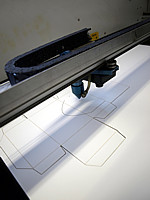 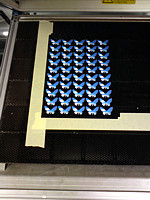 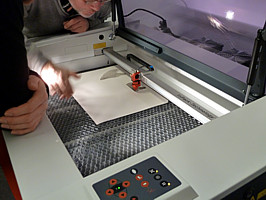 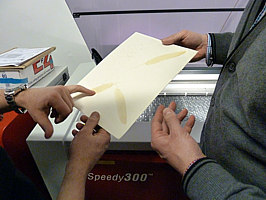 Mette-Sofie D. Ambeck also embraced the burning that the laser does to paper, much as Campbell and Mandiberg did. In a nice reference to my original intention with this project, she first produced an edition of a unique hand cut book that she had made ten years previously. What made this such a good book to return to, was that she had burnt, by hand, many of the pages in the original. In reproducing it she decided that burning these pages again was unnecessary, but she did embrace the fact that the laser burnt all it cut through. We selected a paper for her to use where the burning was reduced to a minimum, but it was still there and as the pages are placed next to one another this becomes more apparent. What was interesting was that Ambeck complained that the initial file preparation took as long as hand cutting the single original, but as with many digital production techniques, once this was done, many more could then be produced. Cutting each double page spread individually for Steam, Salt, Milk was very time consuming, but the effort for this was well rewarded. At the London Art Book Fair at Whitechapel Gallery in September 2010, Mette-Sofie D. Ambeck was presented with the Birgit Skiöld Memorial Award for this book. Fantastic recognition for a beautiful and excellently conceived book that really explored the laser cutter as a creative tool.

As I write this I have just been working with members of staff at AKI/ArtEZ, Academy of Fine Arts in Enschede, The Netherlands. I was invited to help them set up and develop a laser cutting area in the college, and run workshops there over a 5-day period for staff, students and graduate artists and designers. In experimenting and testing we have just discovered that the laser cutter can do something that had previously been considered near impossible. The artist Rudi Bastiaans has been printing on and working with porcelain paper for many years, but he had been unable to cut any holes or make marks in it after it had been fired. During the testing of their new laser cutter we discovered that this was now possible. It is early days, but another new and interesting development could be in seeing how much further this can be taken, and also to reassess some other surfaces that have previously been deemed too fragile to work with; these could be adapted and enhanced using current laser cutting technology.

As laser cutters become more affordable and available, they will of course become a regular feature as a production tool for artists and designers. At the moment, the stumbling block for many a prospective user is an understanding of what the machine is capable of, and the software needed to produce the desired results. But as more and more children use this equipment for design technology classes as they progress through school, this will become less of an issue, and hopefully the equipment can then be fully tested as the creative tool it can be. By the time they have become degree or post-graduate students, or practicing artists and designers, there will be no steep learning curve for them – the possibilities of the technology will be in relation to ideas and how far it can be pushed. Just as long as the unique qualities that this technology can offer are embraced and not hidden.

Information and downloads from the project

Presentation at the Doverodde Book Arts Festival, May 2010 Tom’s talk discussed how artists are using the laser-cutter as a creative tool, with examples of artists works on paper and artists’ books.

Artists’ Case Studies for the project

You can download the case studies for each artist below as a PDF.

Mette Ambeck, Denmark
A four-day residency in the Laser Studio in the CFPR at UWE, Bristol from 5th and 8th July 2010. I knew that Ambeck had not used laser cutters in the past, and cuts her work by hand, so this was one of my primary reasons for inviting her to produce some new work using the laser cutters. Although Ambeck produces much of her books and paper cut work by hand, she is very computer literate with a very good knowledge of vector-based programmes;

Su Blackwell, UK
A four-day residency in the Laser Studio in the CFPR at UWE, Bristol from 28th June and 1st July 2010. I knew that Su Blackwell had only briefly used laser cutters in the past. Much of Blackwell’s work is produced entirely by hand, and she will adapt and alter her three-dimensional cut works in progress as a response to how the material is reacting;

Tom Sowden, UK
For the project I was also required to produce new paper-based artwork at the Laser Studio in the Centre for Fine Print Research at UWE, which I undertook from May until August 2010. Until this point I had only infrequently used laser cutters for the production of my artworks in paper and book form.

The free symposium for the project was attended by 75 delegates in the UK and mainland Europe on 15th September 2009. The delegates ranged from academia, independent artists and craftspeople, to librarians, teachers and technical staff from schools, colleges and other HEIs.

Drawing with Fire: An exhibition of laser cutting by book and paper artists

Drawing with Fire: Pop-up show of the Laser-cutting exhibition and workshops

Paper Tests
A set of paper tests on a range of substrates using Nitrogen or Compressed air as the cutting catalyst. This can be downloaded for reference to compare how the laser cuts on these papers with each option.

For more information
A PDF of links to websites for Artists and designers; Practical information; Commercial links and Manufacturers and dealers.