Printed Poetry Project is a series of events that mark the culmination of a Centre for Print Research (CFPR), UWE, Bristol letterpress research project in collaboration with poet, writer and artist, SJ Fowler and letterpress printer and publisher Pat Randle (Nomad Letterpress).

PRINTED POETRY SYMPOSIUM
Thursday 14th October – Arnolfini, Bristol, UK
SJ Fowler will discuss the project and the resulting publication in a keynote online presentation. In addition, seven poets, letterpress practitioners and publishers will present projects, publications and prints that evidence their relationship to the printed poem through their lived experience of creating words, images, performances etc. through this physical print process.

We will also hold a ‘live’ letterpress printing event at the Letterpress Collective in Bristol, pop-up exhibitions at UWE Bower Ashton library and an in-person meeting and pop-up exhibition at Arnolfini Bristol with some of the symposium presenters. The events will convene these communities and examine relationships between creative practitioners and the haptic production of the printed word within contemporary letterpress publishing activities. £10 a ticket which includes a goody bag of printed poetry items.

SJ Fowler: Letterpress and Poetry – the Printed Poetry Project – A talk on the potential of typesetting and letterpress printing as an active collaborative process for poets. Using the recent CFPR supported ‘Printed Poetry Project’ (an exchange between Fowler, Angie Butler at UWE and Pat Randle at Nomad Letterpress) as a case study, this mini lecture will explore how poetry might respond to the auspices of print, through serendipity, vernacular and process, and how it might alter and change when actively engaged in what letterpress can achieve. When often the relationship between poets and printers is one of commission, or separation, how might be we more innovatively integrate these two artforms, in order to produce original and innovative results? 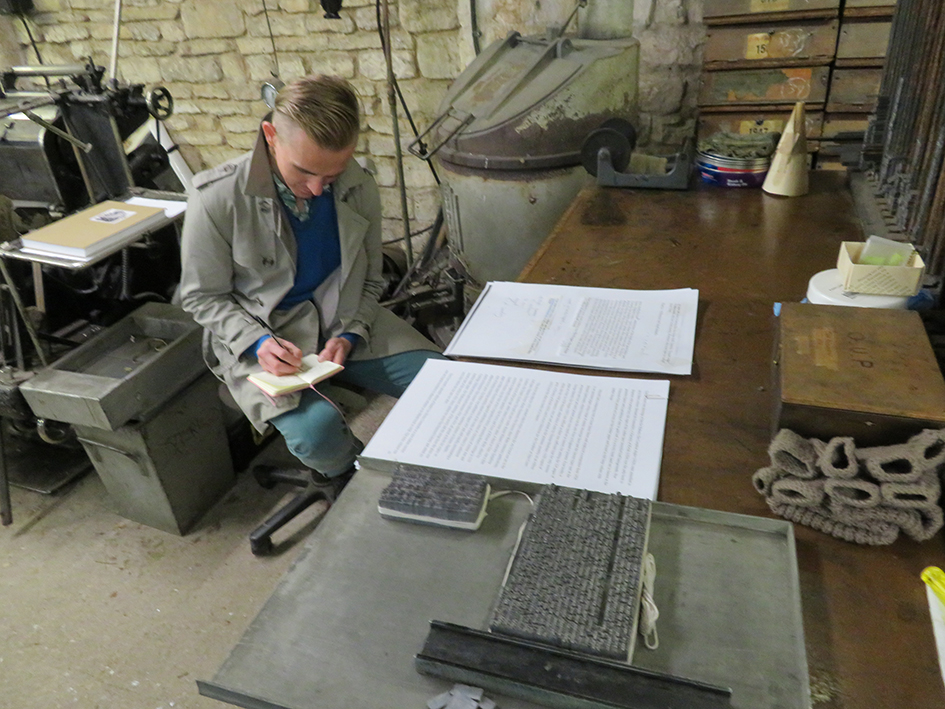 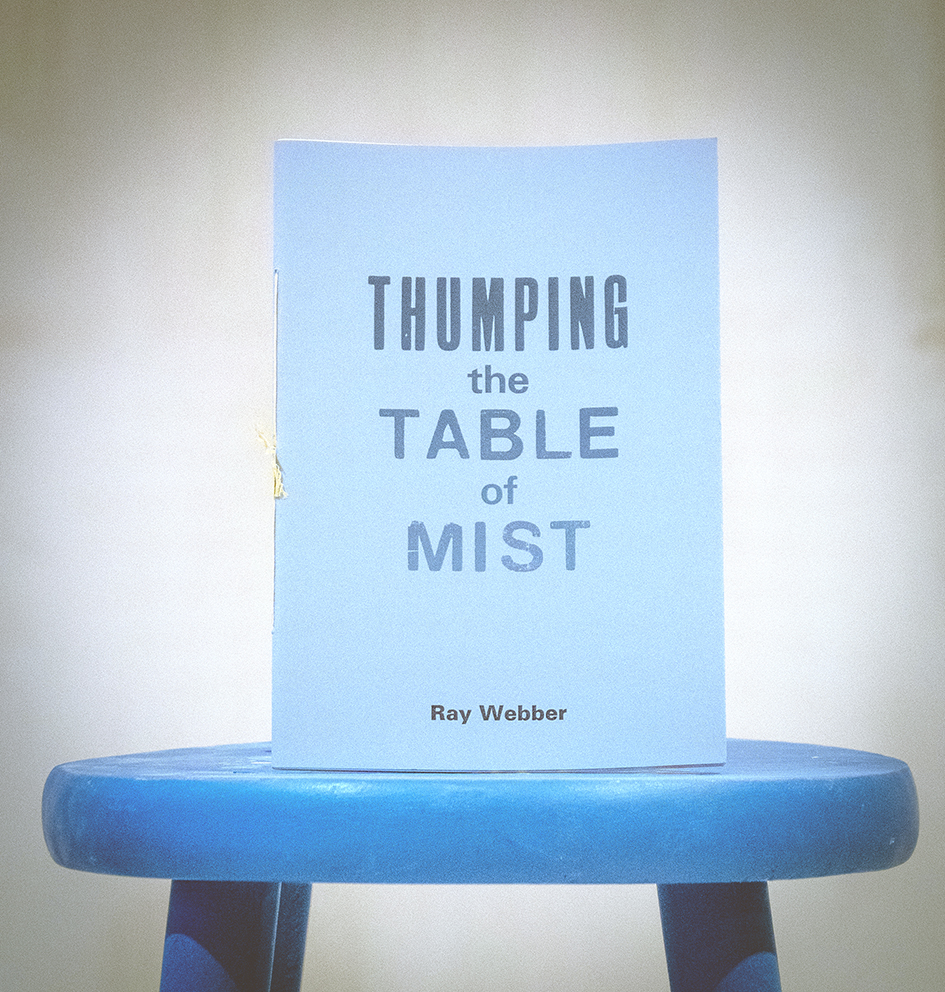 SJ Fowler is a multidisciplinary poet who works between literature, theatre, film-making, visual arts and performance. He curates many live literature events around the UK and Europe. Fowler is the founder of the European Poetry Festival and is currently, Director of Writers’ Kingston, at Kingston University.

Nancy Campbell is a poet and non-fiction writer with a background in letterpress. From the millennium onwards, she studied as an apprentice in fine press studios in Canada and the US before establishing her own press Bird Editions in Oxford in 2010. The material form of the book and the insights gained from collaboration with artists remain crucial to her poetics. In 2020 Nancy Campbell received the Ness Award from the Royal Geographical Society for her writing on the Arctic environment, including the books Disko Bay and The Library of Ice. Nancy will discuss the use of letterpress to record an endangered indigenous language (and consider the intersection of typography and topography) in the artist’s books How to Say ‘I Love You’ in Greenlandic: An Arctic Alphabet and other works, following a residency at Upernavik Museum, Greenland.

Antony Dunn, the People Powered Press. Built by JKN OilTools in Batley, West Yorkshire, the People Powered Press was originally created for These Northern Types project in 2018, by Spilt design studio and is the largest letterpress printing press of its kind in the world. In 2020, the People Powered Press CIC was established as a non-profit organisation, set up to amplify local voices and words worth spreading. It works with community groups, through writing and printing workshops, to create prints that are then displayed in the heart of the groups’ communities – outdoors and in. Antony Dunn is Poet in Residence at the Press. As part of 2019’s Hear My Voice festival in Barnsley, he and the Press were invited to run writing and printing workshops with local community groups, creating a series of collaborative poems and prints.

Among other works, Antony is currently working on a new poem for the Saltaire Festival 2021, to be designed for the People Powered Press by its founder, Oli Bentley. The Press is beginning a major programme of community engagement activity across Bradford, creating poetry for prints and murals with over a dozen local groups. Antony will be talking about the challenges – and the rewards – of writing and printing poetry at a large scale in collaborative community workshops, and of working with very, very large type.

Leonard McDermid established the Stichill Marigold Press in 1990; under this imprint he has produced many small artistic pamphlets. Landwaywon the Callum Macdonald Memorial Award in 2017. Using two vintage Adana eight-by-five hand presses and two ten-by-eight Ayers Jardine (Adana) flatbed presses, together with traditional metal and wooden type, printing blocks and unique hand-cut lino and wood blocks, the press was founded with the aim of maintaining and developing the creative aspects of printing by hand. The hand printing process is time consuming, and the output is inevitably small in scale and quantity. The visual appearance of letterpress work, with its subtlety and textures, is increasingly being appreciated in contrast to the ever more sophisticated but uniform appearance of computerised printing. Perfection, to which traditional printers aspired for over five hundred years, is now attainable, but imperfection and the human elements of hand production have their own appeal. Leonard will share some of his favourite letterpress printed pamphlets from the Press and discuss the stories behind them.

Andrew Morrison makes small editions of hand-printed books, posters and postcards usually using letterpress and woodcut, printed in a small workshop near Cirencester in Gloucestershire. He states that, “the physicality of letterpress, with its limitations that necessitate invention and the acquired individuality of letters, provides a complementary process for my own investigation into word and text inter-relationship. Letterpress is a dynamic means of collaboration with other poets and authors who wish to explore the visual within their texts.”Maria Stadnicka is a writer, journalist and PhD researcher at UWE, Bristol. She is currently an associate lecturer in the Sociology Department at UWE and her research investigates the impact of socio-cultural trauma on social groups in Britain. Maria’s creative practice explores how social and historical contexts impact on the process of experiential integration in art and culture. Maria is the author of: The Geometric Kingdom (2020), Somnia (2020), The Unmoving (2018), Imperfect (2017). Her latest collection Buried Gods Metal Prophets was included among the best poetry books of 2021 by The Telegraph Arts (July, 2021) and has been highly-commended for The Forward Prize 2021.

For Printed Poetry Andrew Morrison and Maria Stadnicka and have documented the process of making a collaborative print – a dialogue between poet (who also draws) and letterpress artist (who also writes). The poem reaches towards appropriate visual form as letterpress variations are passed between the two.

Maria and Andrew have worked together on a number of projects involving written/spoken word and visual arts; most recently Andrew’s letterpress collages made in response to Maria’s poems Buried Gods Metal Prophets (Guillemot Press 2020).

Ndukwe Onuoha is a copywriter and spoken word poet. He says, “Over the years, I have performed on different stages across many countries, telling everyday stories with my work. My latest poem, ‘Isee’, serves as a prayer to help us connect with the divine within us and the humanity in each other, especially as we were gradually coming out of lockdown. ‘Isee’ is an Igbo word that roughly translated, means ‘amen’. For Printed Poetry I will talk about the manifestation of ‘Isee’ in textual and visual form. In working with The Small Print Company I could bring the poem to life through craft. The painstaking process of putting each letter into its place, as well as carving away at the lino to create a tapestry of Nsibidi symbols gave more depth to the poem.

Pat Randle runs Nomad Letterpress from the Whittington Press, near Cheltenham. Pat grew up working at the Press with his father John, studied History of Art at Leeds University, and went on to finish his apprenticeship with Hand & Eye Letterpress and Alan Kitching in London. Patrick is co-editor and printer of Double Dagger, printer of Matrix, ‘the finest periodical of the book arts of the 20th Century’, and has led letterpress workshops and demonstrations extensively throughout the UK and Europe.

Pat believes that printing and designing using the third dimension–be it with wood, metal, lino or hardened plastics–cannot be surpassed for quality and character. He will discuss the poetry projects he has worked on, describing how he builds relationships with those he works with and by what means the creative possibilities of printing by letterpress are exploited in each project he undertakes.

Barrie Tullett is Programme Leader for Graphic Design at the University of Lincoln, and co-founder of an artist’s book collective called The Caseroom Press. His work includes an ongoing project called The Typographic Dante (30 years and counting), where he set out to illustrate Dante’s Divine Comedy with a range of typographic illustrations using now commercially obsolete printing process – letterpress, typewriter art and Letraset. He has also collaborated on a number of pieces with writers, artists, translators and poets – including an invitation from the British Council to collaborate in the Klang Farben Text Event at the Lyrik Kabinett, in Munich, 2020 – where he performed several sound poems, including A Song For An Art School and produced two artists’ books based on the text MANIFEST 55 by the Austrian artist FALKNER.

Barrie will discuss the original idea behind the poem A Song For An Art School, its beginnings as a letterpress print, and its subsequent lives as an installation, artist’s book, and performance piece.

*Physical works will be displayed in the library cabinets for students and staff to see. We aim to be welcoming visitors back from late September. Please check for up-to-date info before travelling. We will also share works with the public online via UWE Bristol Library’s Twitter feed. Up to date info can be found here.