This book-making project began in late 2016 when I bought a pack of over-sized playing cards. I was putting them in my stuffed plans chest when I thought: these cards cut in half would make great covers for a book. I then thought: there are 52 different cards, so instead of making one edition of 52 books, why not make 52 individual books, a new book made in every week of the year? This seemed like a reasonable proposition, a challenge yes, but one that didn’t seem beyond the realms of possibility to achieve. Looking down at that drawer full of paper, ephemera, photos, cuttings, stamps and stencils also triggered another decision; I must already own all the materials used to make the books – this was also a great way of using all this stuff that had accumulated over the years. The only exceptions were if I needed more glue or thread, if I was given something, or if the materials appeared in an item I was buying anyway, such as a magazine. 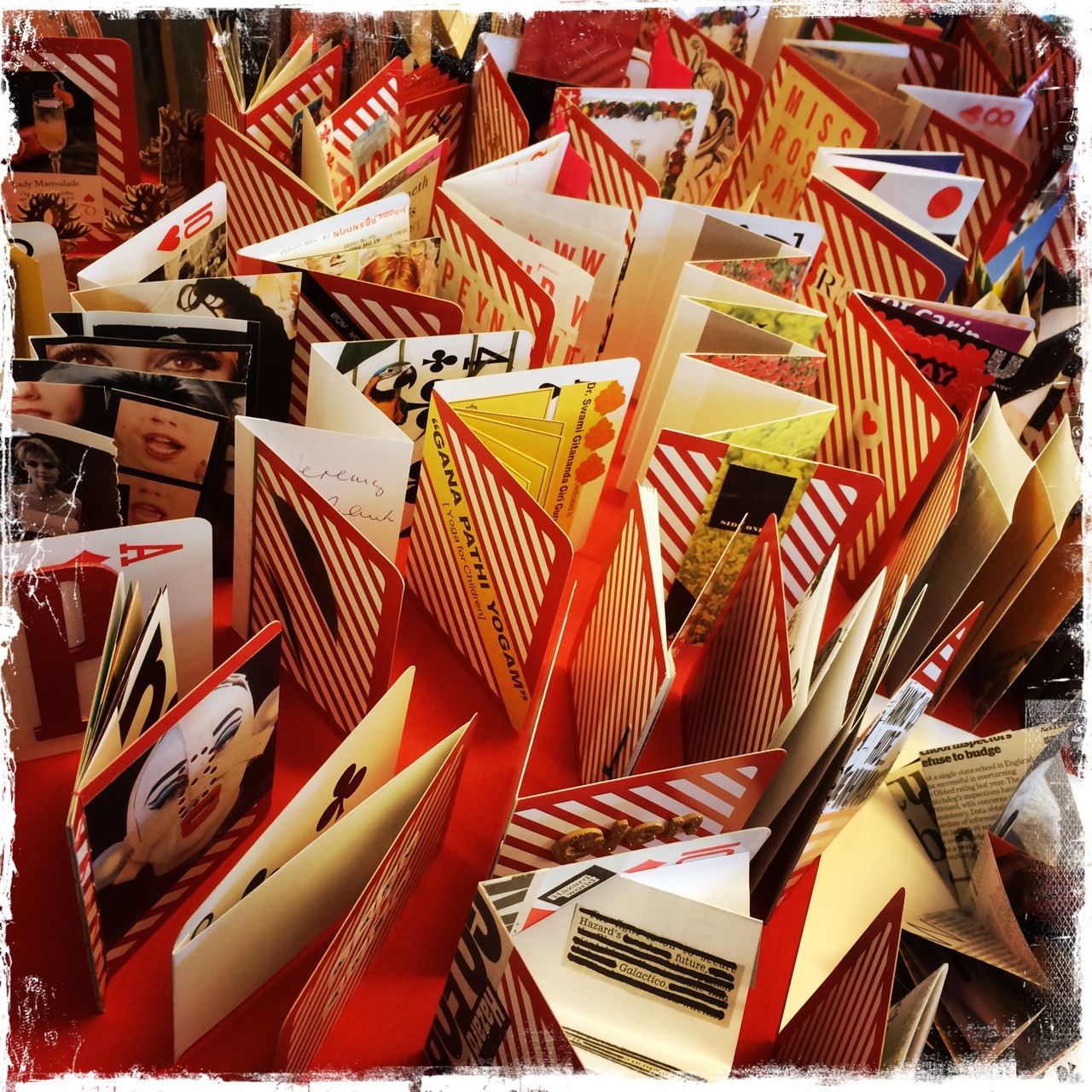 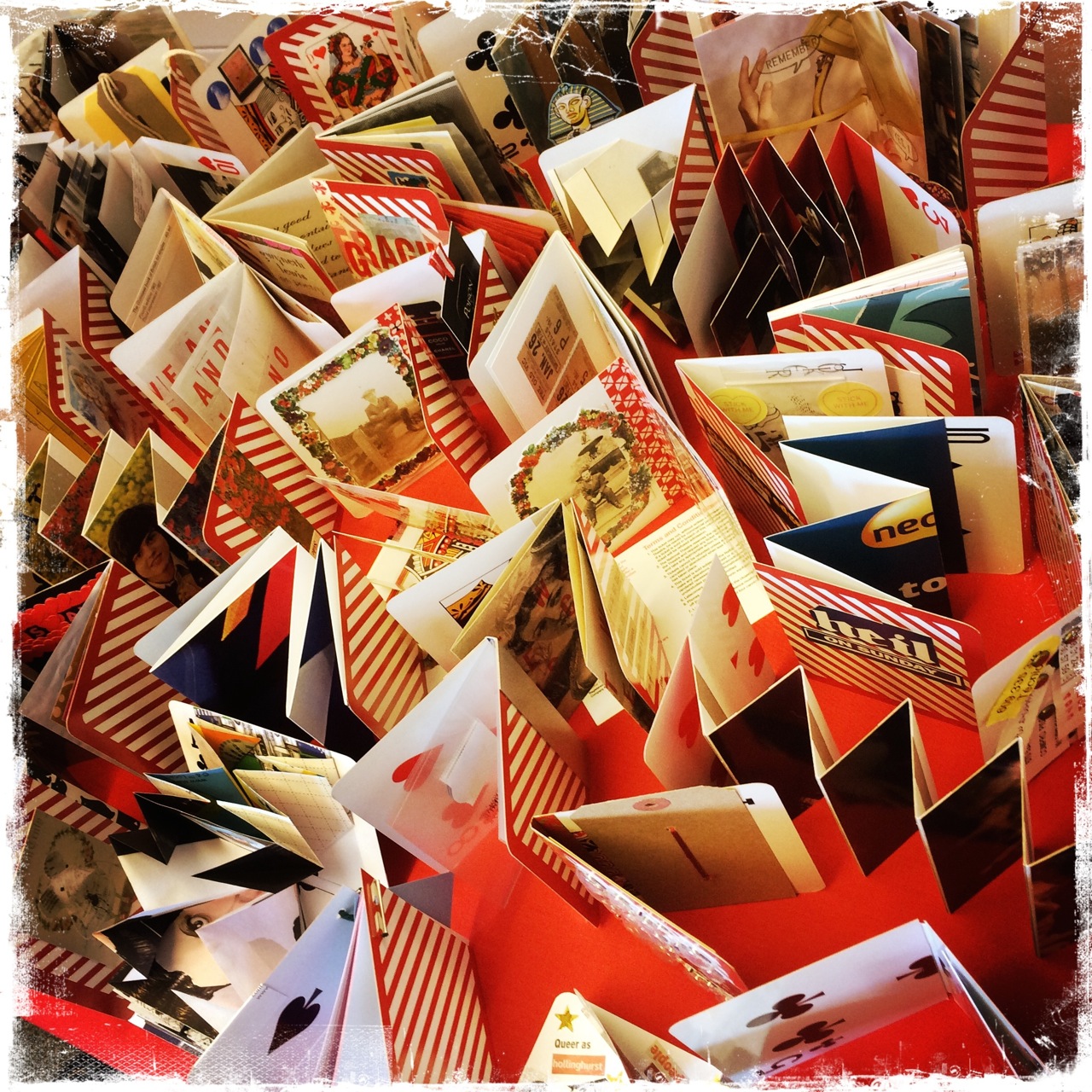 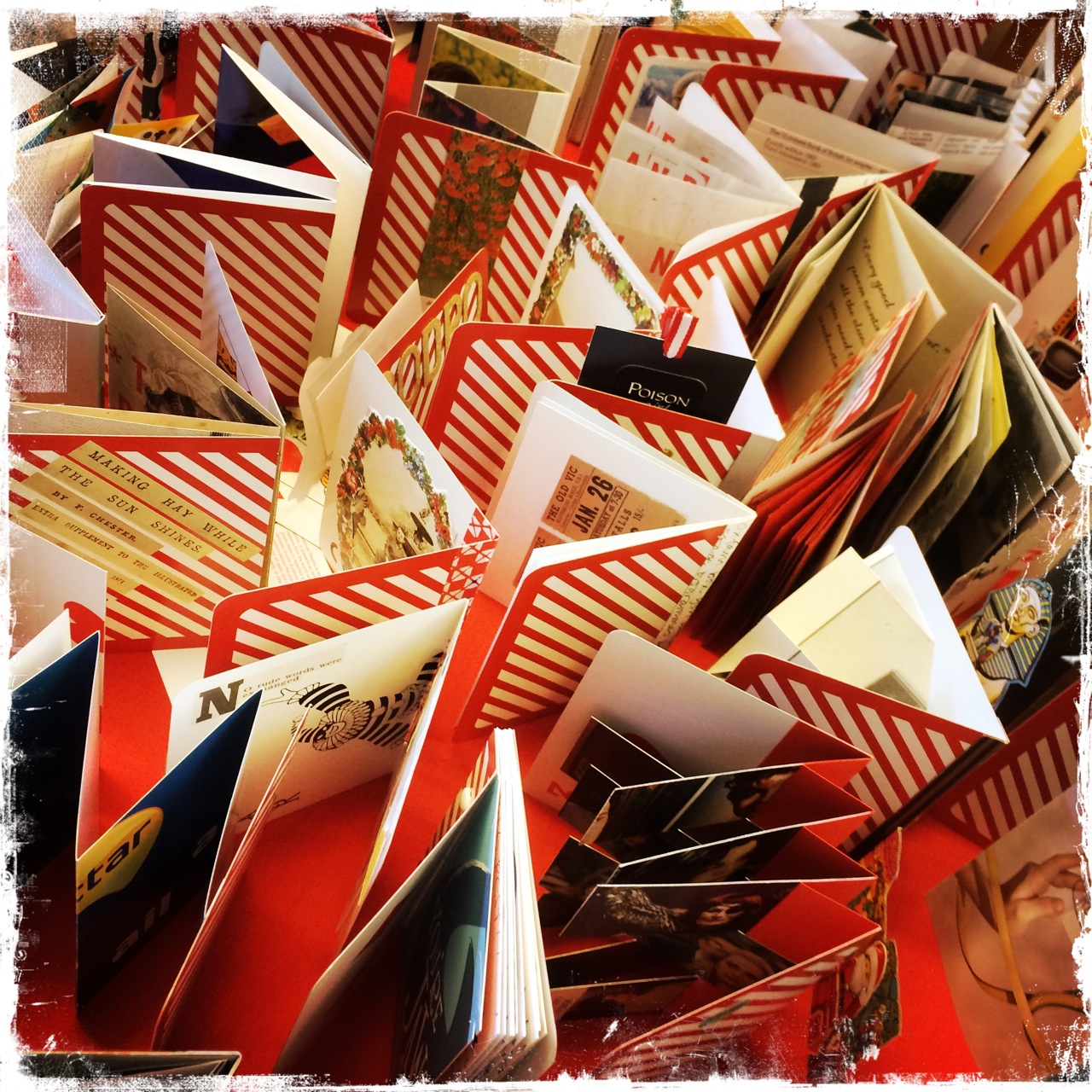 I knew what the first book (SEVEN NEW YEARS 1977-2000/King of Diamonds) would be, a typewritten, stitched book compiled from my surviving diary entries of 1st January, but pretty soon the books took on a life of their own and few were planned in advance. Almost each book began with a pile of materials that I thought chimed with each other and which I could cut/print/glue/tear or bind together in a way appropriate to that idea. This was a very different approach to my usual working practice, which involves lots of research, planning and mocks up before making a final edition. During the challenge, the only real stage was the making stage and I found this incredibly freeing and exciting. It allowed me to experiment with new formats that I would not normally thought of using. I discovered that I loved making pop-ups and concertina folds and rubberstamping lettering and using stencils! The playing cards themselves also became important influences on each book, most were chosen at random, but a few were specific choices e.g. GRACE/Queen of Clubs. 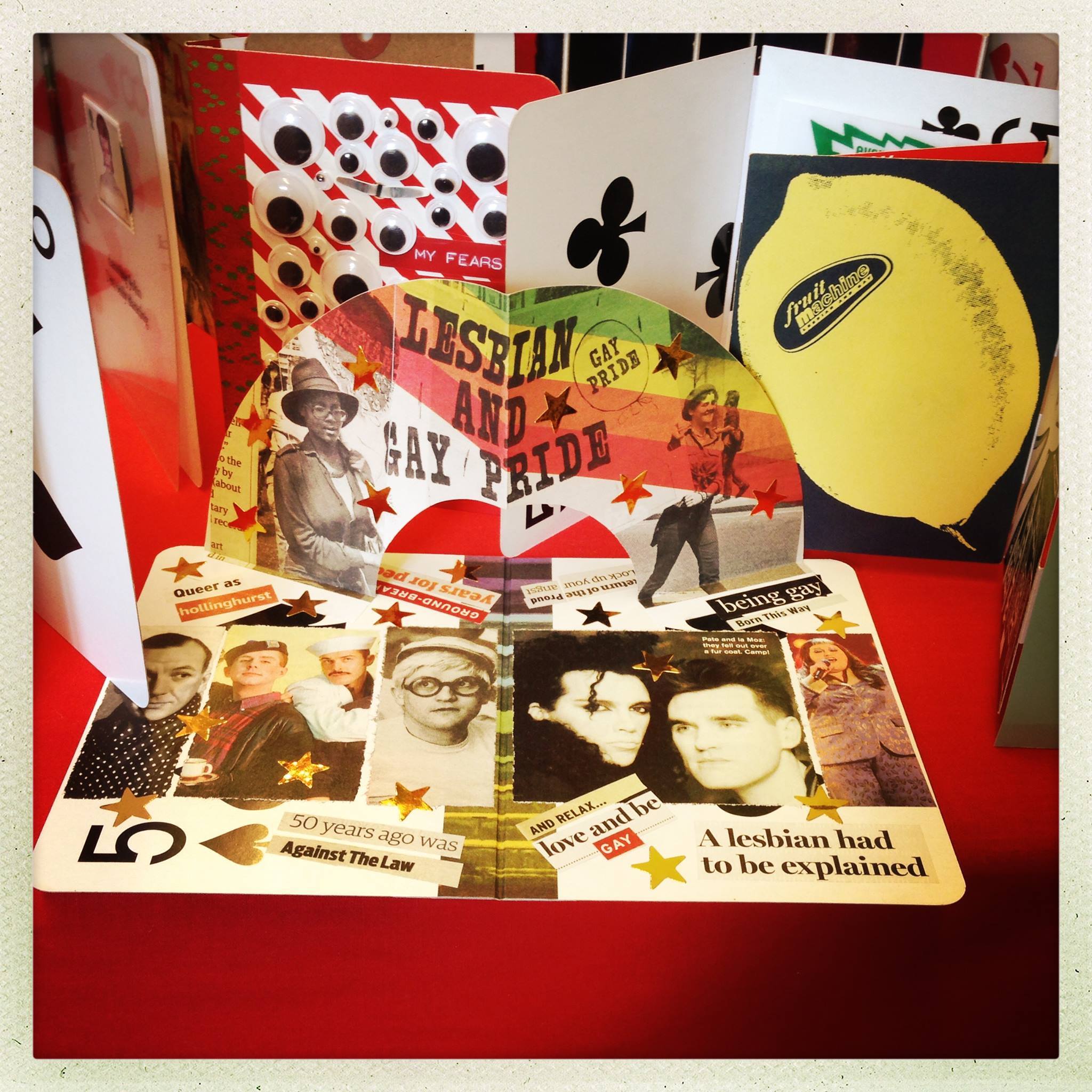 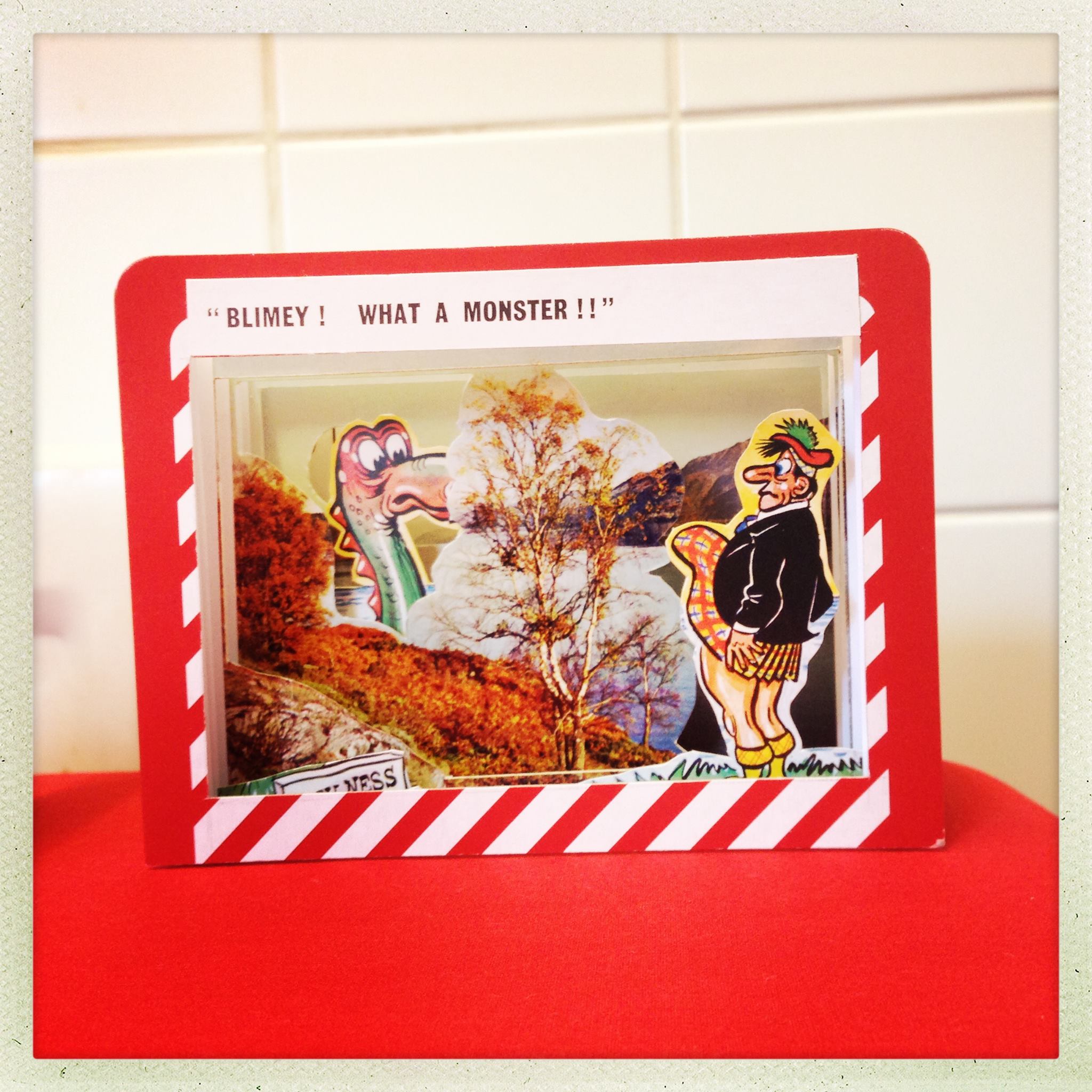 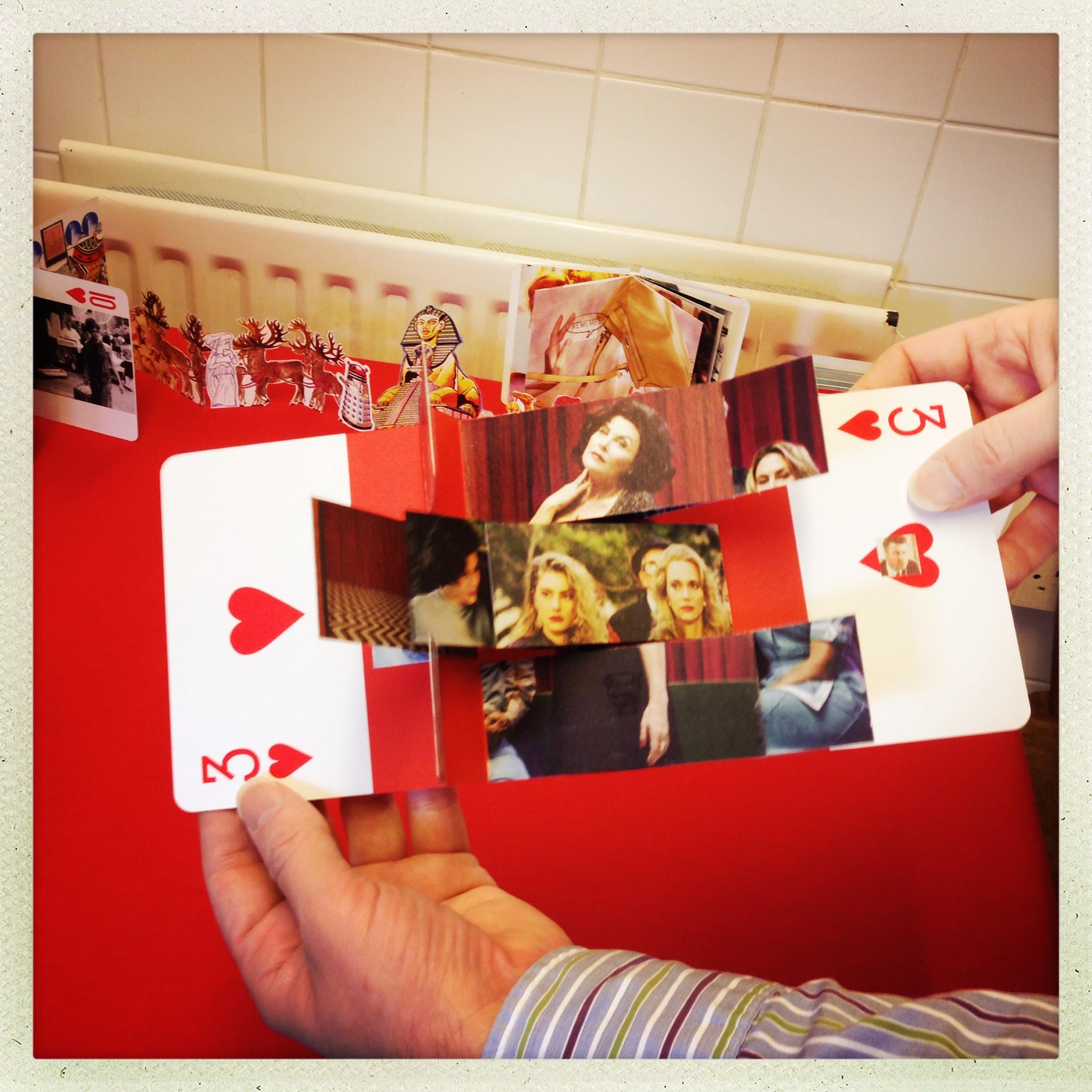 The books vary in subject matter, some are influenced by events in the week that they were made, such as the General Election (MAYFLOWER/Four of Spades) or the anniversary of The Sexual Offences Act 1967 (THE NIGHT I SANG IT’S TAKEN 50 YEARS/ Five of Spades). Some books used materials I have kept since Primary school (ONLY ONE WEEK TO GO 1 WEEK TO GO/King of Clubs), and others refer to earlier Hazard Press books (MEET ME AT THE FOUNTAIN HE SAID/Two of Clubs). Many of my idols made their way into the books such as Ganesha, Divine (3 times), Diana Ross, Twin Peaks and the Fantastic Four. In turn, the challenge has already influenced my other Hazard Press books – the design of BEAST BOOK, my entry for the Redesigning the Medieval Book display at the Bodleian Library, evolved to include pop-up and hand-stamped elements due the work I had produced earlier in the project. I want to continue with this approach and to produce smaller runs of more varied books and make more editions each year. I would like to tour the challenge books to more venues, so if you have any ideas please get in touch.

P.S. I couldn’t not use the two Joker cards, so eventually I made 54 books! 53 will be on display. The 54th (MODPO/Joker) is a mirror to book 37 (MODPO/Jack of Hearts) and was made as a gift for the Kelly Writers House in Philadelphia.

All the books that form the Making 52 Books In 52 Weeks Challenge will on display at Bower Ashton Library, UWE from 26th January to 28th February 2018.