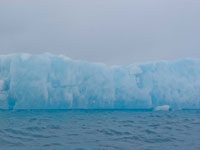 In 2013 interdisciplinary artist and writer Stevie Ronnie visited the High Arctic as part of the Arctic Circle international residency programme. This exhibition of artist’s books was produced onboard the Barkentine Antigua during the artist’s journey through the alien and rapidly changing landscape of the frozen North. 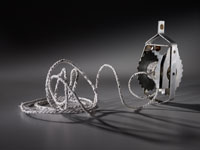 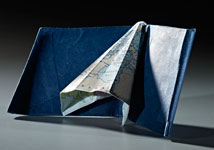 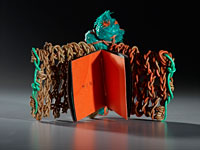 The books in the series were made using materials that Stevie found on his travels. Even in this remote and sparsely populated part of the planet vast amounts of human debris can be found. The artist has re-purposed this debris using traditional bookmaking techniques and materials to produce a series of beautiful and curious book objects.

The Arctic Was a Poem Twisted into Rope is a collaboration with US-based book artist and printmaker Amanda Thackray. A weather balloon winch has been mounted with a paper rope that can be unwound to recreate the sound that is produced when a weather balloon is launched. The rope is made from the lines of a poem that is written in a form that reflects the patterns used in maritime rope making. Other books in the series utilise discarded plastics, weather balloon brackets, copper wire found in an abandoned Arctic coal mine and waste materials from the shipping and fishing industries.

The exhibition is part of Arctica, a year-long series of interlinked artworks on the subject of climate change taking place across the UK. The works are interdisciplinary in nature encompassing literature, performance, photography, artist’s books, film and a public art installation.

Stevie returned from the High Arctic with a new perspective on our consumer culture: "I’d known that change was necessary but visiting this remote, medialess place where nature is clearly in control brought home the enormity of the challenges that face us as human beings. And what can I, a mere speck on the map, do about it? As a writer, as an artist, I can protest in the Latin sense of the word: protestari – “to declare publicly, testify".

Arctica been made possible through the financial support of Arts Council England, Durham Book Festival and New Writing North with additional support from The Arctic Circle, Free Word Centre, the Arvon Foundation, NewBridge Books, Filmpoem and the Centre for Fine Print Research at UWE

Further information on Arctica can be found at: arctica.stevieronnie.com