My interest in artists’ books began during my study for an HND in fine art at Hereford College of Art and Design. I was, euphemistically known as, a “mature student”. During my time at Hereford I owed much to the inspirational guidance of the print room technician, Roger Biggs and to Guy Begbie who tutored book arts. My focus during the final year of the course was in printmaking and I had early successes with work being accepted for open competitions: Hunting Art Prizes 2004, Triennial Open Print RWA 2004, Originals 05 Mall Galleries and Welsh Artist of the Year Exhibitions 2005 and 2006.

I began to feel that I needed a fresh impetus in my practice which had become secondary to other interests and demands on my time. I enjoy study and was accepted on an MA in printmaking course at the University of Wales, Newport; I completed the two-year period of study in 2010 and included book arts in my final project.

Following a move to Dorset in 2012, I enrolled as an art volunteer with Dorset County Hospital in Dorchester. I visit the hospital roughly on a fortnightly basis and engage patients in simple printmaking – rubber stamping and offset printing using water-based relief ink. I work mainly on the Stroke Ward with patients in their 60s to 80s. My visits last around one and a half hours. 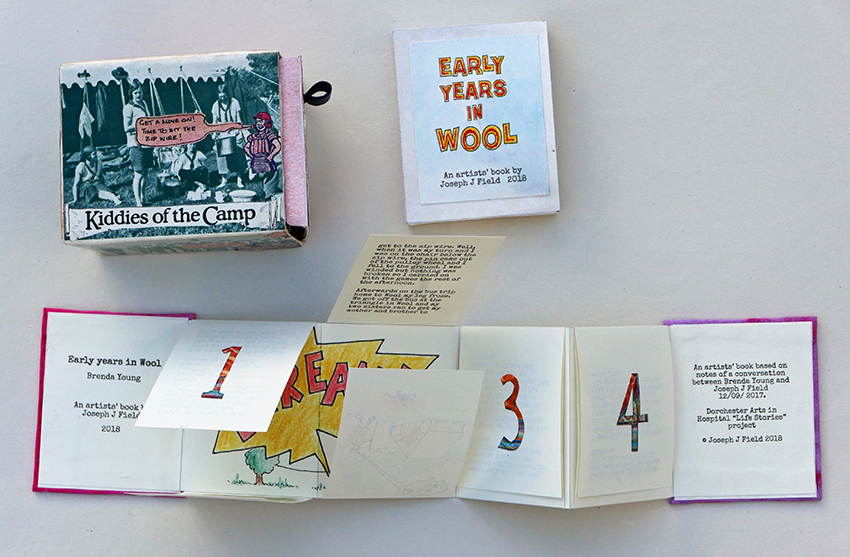 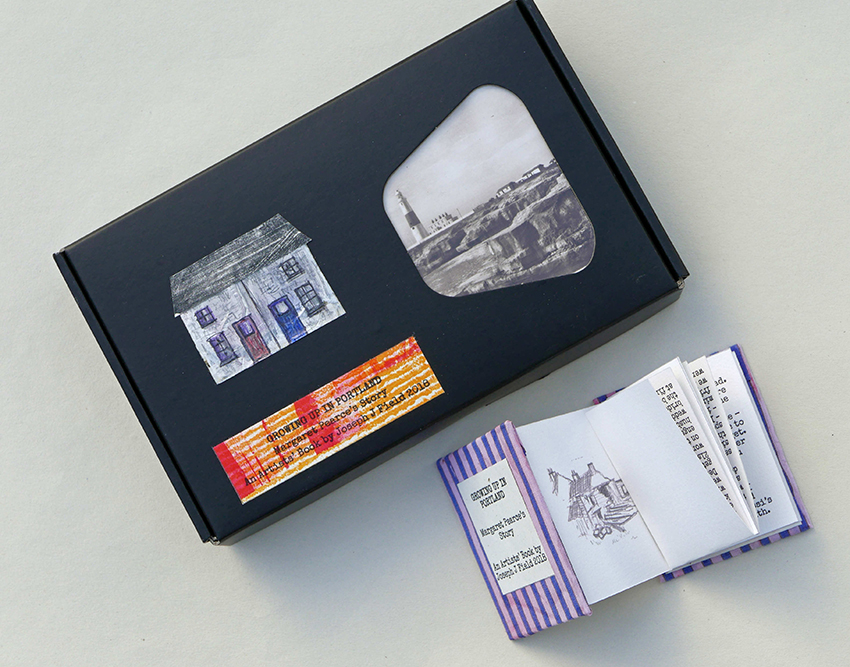 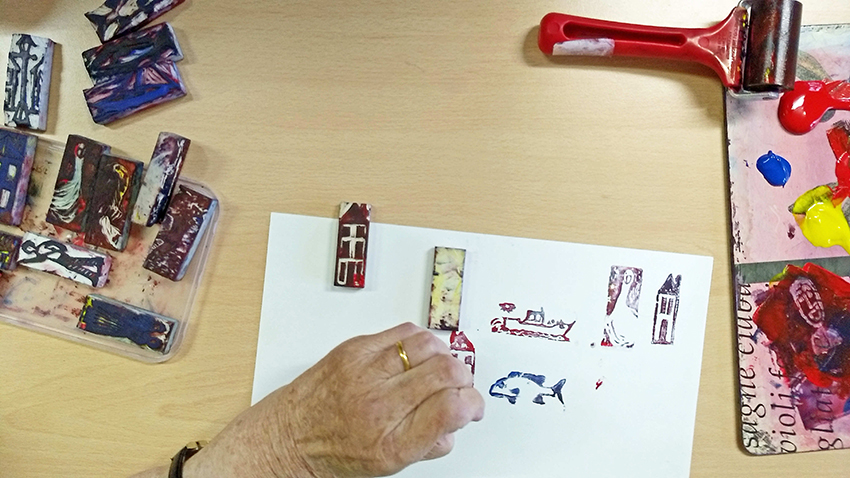 It became clear to me after two or three sessions that conversation was as important as the art work in lifting the patients out of their concern and discomfort for a time.
I saw them “come alive” as they talked about themselves.

I could see that, if the patients were willing, I could capture some of their stories in artists’ books – otherwise the stories would be lost. I undertook some research on the psychological and medical benefits of reminiscing which I included in a proposal to Arts in Hospital, the “Life Stories” project, which was accepted.

I collected my first story from a patient on the Stroke Ward on the 7 March 2017. She wanted to write her story herself and in around 100 words recalled an incident when she was 4 years old and was in danger of drowning off the beach in West Bexington, Dorset. Then followed my first book – a miniature concertina book hand-written on Simili paper with cloth covers and rubber stamp and offset illustration. In anticipation of an exhibition I decided that each exhibition piece would relate to the story and the author in some particular way. I envisioned a “container” for each book that would include reference documents, maps, badges, postcards, books etc. to provide a context for the
life and the story. 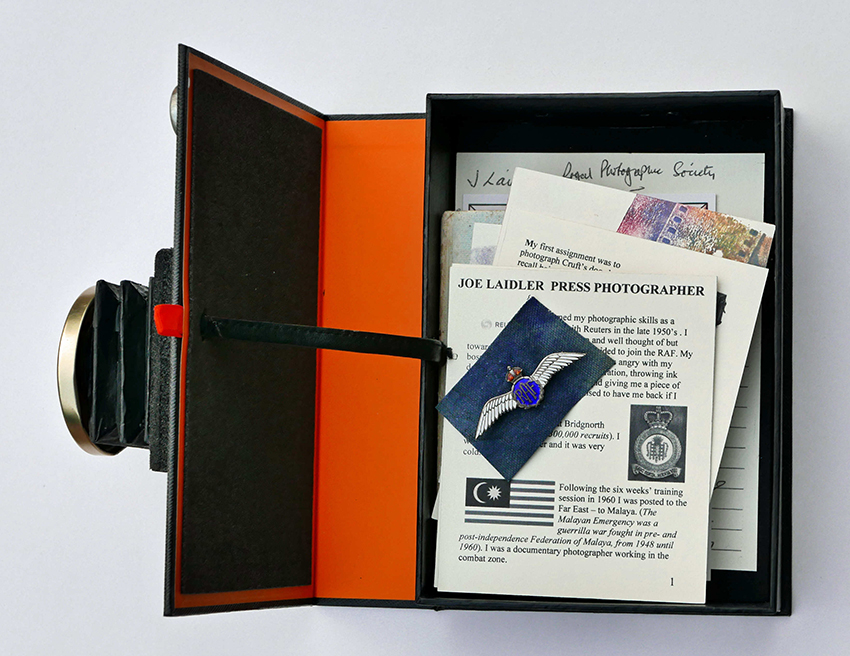 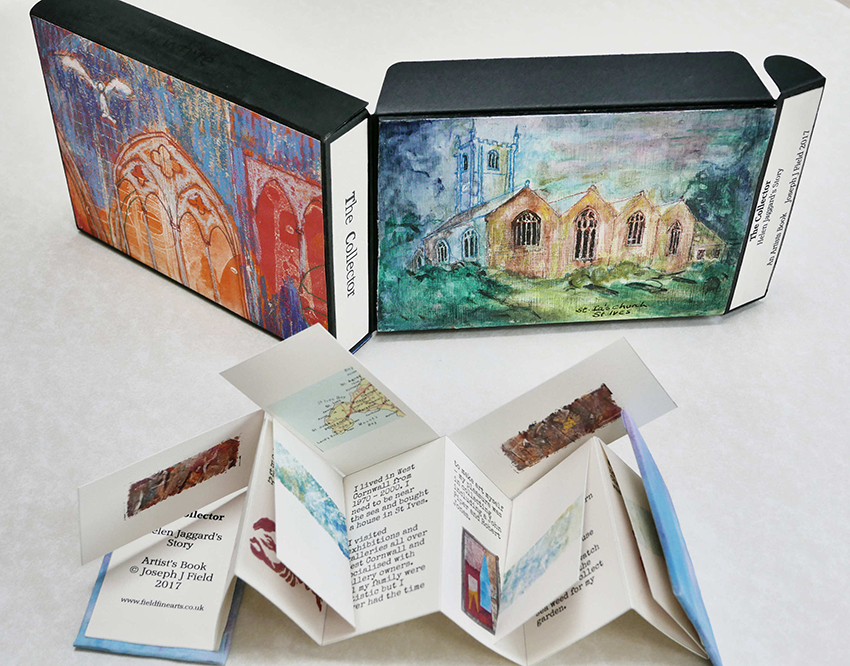 The work was exhibited in Dorset County Hospital from April to July 2018 coinciding with the 70th anniversary of the NHS. The exhibition included 2D text art and a series
of drypoint portraits of seniors and it was well received.