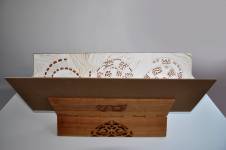 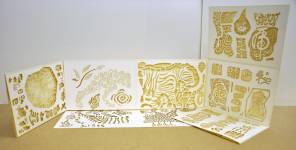 I have always been curious about the origins and meanings of, as well as comparisons between, Eastern and Western cultural heritage. In terms of art, mythology, astrology, and beliefs, this interest increased when I lived and worked in China. I became more familiar with Chinese and Asian cultures through learning the Chinese language.

As I studied for my MFA at the Central Academy of Fine Arts in Beijing, I had the opportunity to research and practice Chinese approaches to printmaking. I became involved in illustration and the book arts through reading Chinese legends.

Since moving to the UK to undertake PhD research, I have been keen to balance East with West, to examine Western culture and practice, its attitude toward, and techniques employed within, printmaking and the artist book. Ultimately I have made a journey through the rich diversity of cultures, crossing the borders between East and West (via the Middle East) on the one hand, and between traditional and digital graphic art on the other hand, in so doing synthesising my own artworks.

The focus of my artworks has been four spiritual creatures, all central to Chinese legend: the Dragon, Phoenix, White Tiger and Turtle. As these four animals were the base of the twelve animals which become afterthought, representatives of the Chinese zodiac, since Chinese constellations, and their link to folk stories and mythology, have been a catalyst for my creativity. The design has taken account of their significance in Chinese history and mythology as well as considering the influence of Western and Middle Eastern motifs.

For this project a series of images and artists’ books are being developed that incorporate and combine traditional methods of Chinese woodcut, calligraphy (including ancient Oracle bone script characters and pictographs), and paper-cut with digital techniques of design, engraving and cutting paper using a laser.

This methodology has been helpful in exploring how the technological revolution has been useful in contriving new ways to produce works of art which may continue to open doors for the further exchange of ideas, experimental practice and interdisciplinary research and creation.